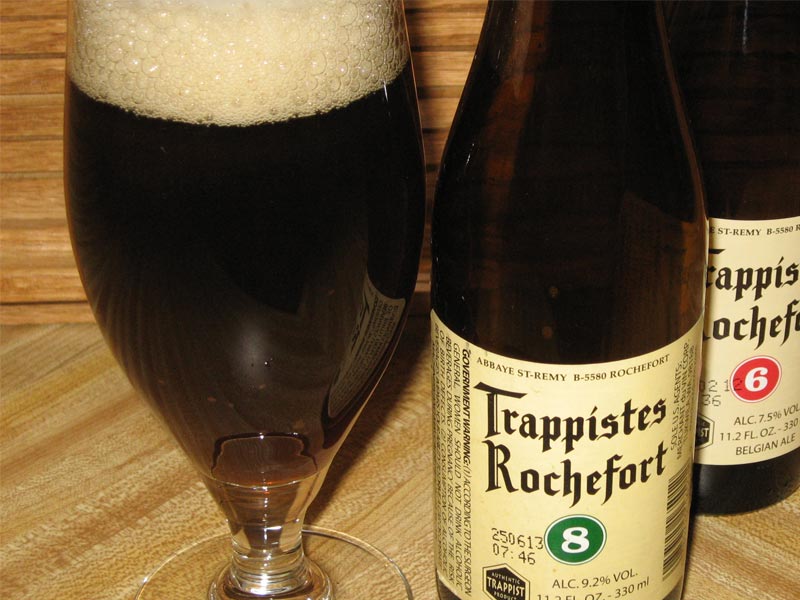 Here is what I found for the second of Rochefort’s brews known as #8.

Appearance: Darker than #6, more of a brown-ruby hue. Head was the same tan color, but there seems to be a more consistent replacement of surface foam.

Aroma: Every pronounced and more predominate than #6. While there is still a presence of chocolate, it is darker/deeper and takes a back seat. Similar hints of raisins, prunes, plums, spicy yeast, and herbal earthiness are noticeable. I got a sweeter nose and you can pick up on the alcohol presence (which comes in at 9.2%ABV). It has a nice medley of fruity and floral layers.

Taste: Sweet at first, which progressed into a slightly alcohol-centered middle, and finished with a rich roasted grain and earthy finish. I would liken it to a caramelized sweetness with an apparent kick. Everything seemed “bigger” than #6 and rightfully so. Deep and rich it tasted hardy enough to sustain a fasting monk with its starchy malt backbone. For the life of me I’m trying to think of what else it taste like…bear with me……ah, molasses or brown sugar. This might be from dark candi sugar (carmelized hard sugar) used.

Mouthfeel: medium-heavy with nice carbonation similar to #6. It finishes well leaving behind sweet, toasted bready aftertastes. There is a small medicinal quality to it, due to the alcohol content, but it does not over power.

Overall: After you pour let the beer settle for a spell. Despite my best efforts to decant, the yeast still found its way into my glass. I’m not a fan of floating bits even if they are a great source of vitamin B.