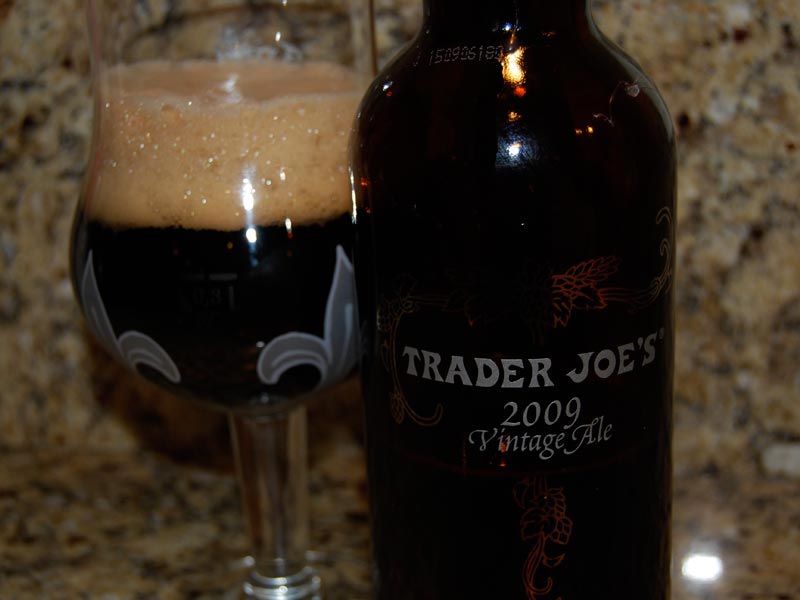 Michael: This morning, after pushing the shovel down my snow-covered driveway for the last time, I stood sweating, aching and wished it was kosher to drink beer in the morning. While I acted on my better instincts and vied instead for a piping cup of Dunkin’ Donuts coffee, I was bound and determined to have a brew later that day. As winter has begun its rampage across most of the nation, so too have the seasonal beers. One in particular piqued my interest at my local Trader Joes. While TJs is known more for their fresh produce and smiling checkout clerks than their beer, I was intrigued. The back of the label further captured me, as it was brewed with the help of Unibroue Inc (made famous in my mind, by their La Fin Du Monde). The beer itself poured jet black with a two finger tan head. While there was something distinct on the nose, I couldn’t quite name it. The taste was a balanced combination of nutty chocolate and hints of lemon. The citrus is what lingers and for a 9.5% abv brew, the alcohol was hidden well in a smooth finish. As it warmed, it sweetened, and by the last few sips it was filled with cola and vanilla undertones. I enjoyed it, but my pocketbook enjoyed it even more. A 750ml for $5 can’t be beat! Keep it on hand for the holidays, or put it down until next year, either way it will warm you on a cool winter’s eve. Grade: B+

John: Anything but the dregs! I learned something by reviewing TJ’s Vintage 2009 Dark Ale on Lees. I learned what lees meant. Lees are the deposits of yeast and sediments at the bottom of the tank after fermentation. Dregs in other words. But this brew doesn’t fit the normal definition of “dregs” as in the dregs of society. This low cost brew (5 bucks for bomber) is a nice, cheap beer that pours black, rich and with fizzy head. I kept this cellared for over a year and anticipated a below average beer but was pleasantly surprised. Once I got past the fizzy head that quickly disappated the aroma of this ale grabbed my attention. It was citrusy and bright. The fruitiness seemed to dominate and the sting remained throughout the session. Since it was a bomber I spend the afternoon sipping this 9% ABV drink. The mouthfeel was thin but a dryness remained for some time after the bottle was empty. It left little after taste except for this dryness. The mystery fragrance and taste is ginger and cloves for those of you scratching your head. There is some lemon as well. For those of you who think you are above Trader Joe’s give their selections a try. You’ll be surprised at the quality of their beer. Of course when you have Unibroue brewing your beer it’s hard to go wrong. PS Don’t be shocked at the final pour it is only the dregs. Grade: B