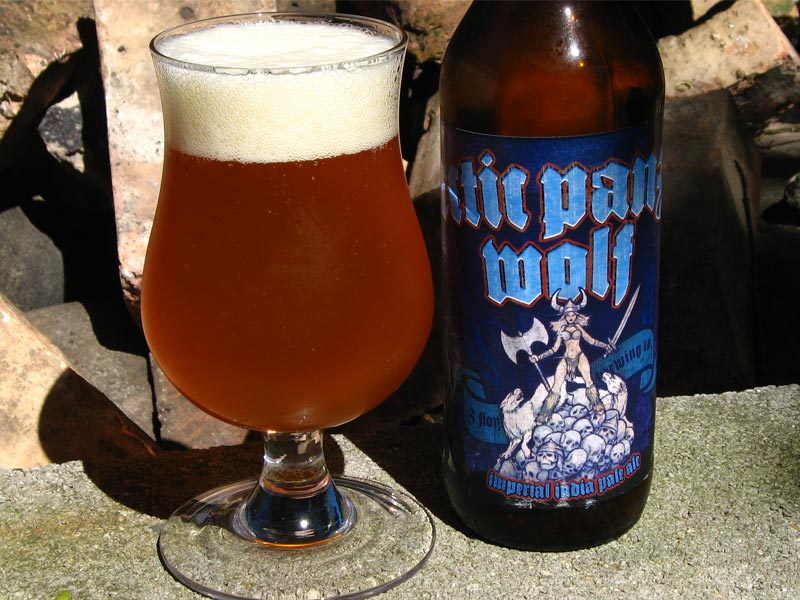 Three Floyds knows how to make great hoppy beers, but I have come to realize that their niche or specialty is found in their IPAs. While most craft beer drinkers love a good IPA from time-to-time, we all have our preference as to what makes an IPA enjoyable to us. I personally like my IPAs to be light in color, exploding with citrus hops, and have a very dry finish. This brew fits that bill.

My tulip glass displayed a light golden/orangey hue that was partially hazy (there was sediment in the bottle). As I was sipping the beer did clean a little. The head was white, fluffy and left an interesting lace pattern. Typical of 3 Floyds the label art is rather interesting as it depicts a Norse woman with a sword and battle axe standing victoriously on a hill of skull and surrounded by her arctic wolf pets.

The aroma delivered a TKO to my nose as it was in fact bursting with a huge citrus hop profile. It seemed like just about every tropical fruit imaginable was in there. Lively, fresh and zesty this brew is on the lighter side of pungent. Don’t worry, it still packs a punch. Citrus notes of orange, clementines, tangerine, and lemon were noticeable as well as mango, pineapple and some guava. There was a noticeable abv warmth after the hop blast as it is a 9% brew.

Since I’ve been on another IPA kick as of late, I can say that this Imperial variation falls well within my top 10. It has a moderate mouthfeel given the yeast sediment which also provides a nice light bready backing to the intense hops. They used Canadian 2-Row malt and dextrose sugar which give it that high abv without making the body heavy. I’d liken it to Apocalypse Cow minus the lactose, somewhat sour aspect. The mouthfeel is rather jamy causing a mild sweetness and the resinous citrus hops to stick to your palate. The finish was mouth smackingly dry as the piney and boozy components stripped away any sweetness. The bottle said that there would hints of marmalade, white wine, and apricot. In hindsight, I’d say those adjectives fit well as there was a slight Resling aroma.

I’ve had this beer twice now and would strongly huge IPA fans to either trade for it or buy it when it is release (limited).