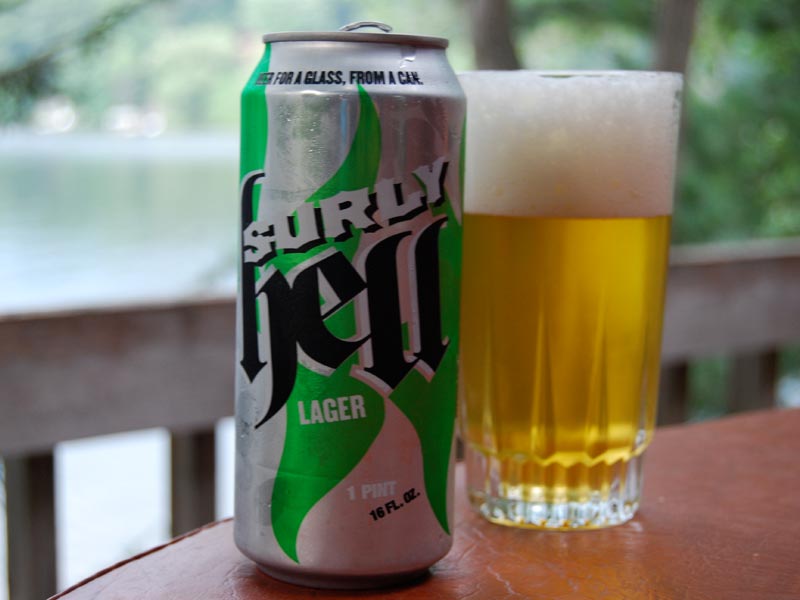 Its another day at the cabin. I know, I’m spoiled, but I’m going to take advantage of an impending storm developing over the lake by sipping on a new-to-me Surly brew. As always when passing through Minnesota, I snagged up a four pack of whatever Surly looks good. This trip, Hell stared me down, devilishly enticing me to this lager, a rarely go-to brew for me, even in the heat of August.

First off, Hell is so named not because there is something so sinful about it. No, instead, it refers to the German word for ‘light’ or sometimes ‘bright.’ And the beer is such. A bright straw golden, it is hazy, which is the first clue I’m not sucking back an AmBevCoors Light. I peer a little deeper into the glass and there is definite carbonation, but not so much as to keep the bright white cap from slowly dwindling over a few moments. No lace, either, a bit of a surprise to me considering the initial three finger head.

It smelled immediately of yeast. Slightly sour, quite bready and a nice splash of lemongrass refreshment made up the nose. No hops as far as my nose could smell, but the body of Pils malt is most definitely present. Pils is huge on the initial sip, bready with that blend of lemongrass again, makes it a palate cleanser and a perfect pair to any summer barbecue choice. The hops follows up the big malt, finishes the sip with a slightly bitter, earthy bite. Despite the drinkability, the overall mouthfeel is still coating and I find my tongue coated for some time after the swallow.

I have stumbled on some great light beer choices this summer. Victory Prima Pils and Left Hand Polestar Pilsner have led me down a new pilsner path of which I had no knowledge previously. They have allowed me to enjoy the lighter side of beer and have set a fairly high standard. While Hell doesn’t quite reach the great heights of these two, it falls in step with a higher standard pilsner choice and, I think, would be a great introduction to craft beer, for those with a currently restricted palate.

Note: I realize that this Helles is not a Pilsner, however, to the vast beer-drinking public, if it looks, smells and tastes like it, its close enough, thus my recommendation for a transition beer stands.