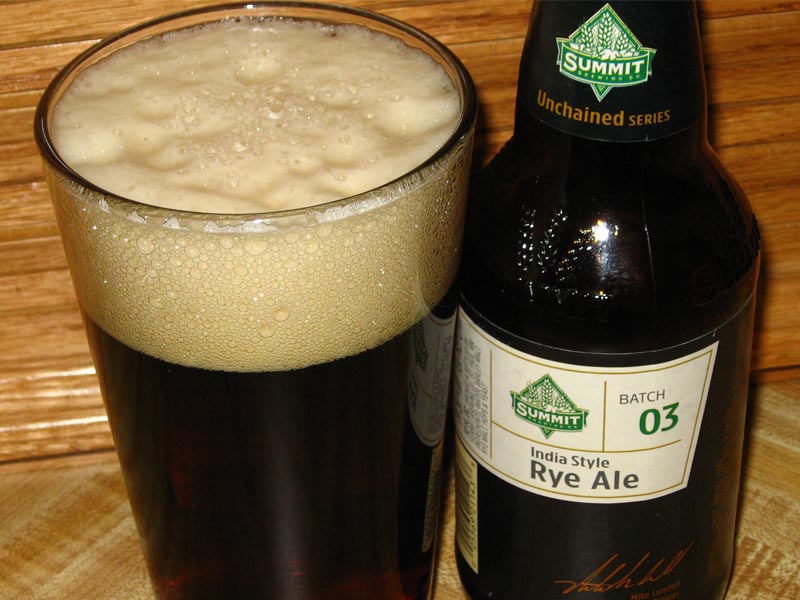 Every once and a while I come across a beer that leaves me utterly perplexed, yet amazed. Summit Brewing Co is responsible for this most recent occurrence. This beer comes in as the 3rd in a systematic release of special brews Summit calls their Unchained Series. These brews are designed to be a platform for their brewers to showcase creativity and talent. Since we have reviewed batches 01 and 02, I thought it fitting to keep the tradition going.

According to their website the brewers at Summit call this an IRA (India Rye Ale), but another synonymous name would be a RyePA. Most of the time brewers will use a smaller percentage of Rye malt to impart a spicy flavor, but not detract from or overpower the other ingredients. This beer however is basically uses rye to the extreme. How so? Well, let me answer that by giving you the grain bill. They use Harrington, Rye, Crystal Rye, Chocolate Rye Malts and Flaked Rye. That is a lot of rye! I’ve never come across a beer that has been brewed with so much before. On the hop side two varieties were used Summit and Citra. The former is a high alpha acid bittering hop and the latter is a new hop that is a cross between 5+ different varieties. As its name might suggest, it imparts a very citrus component (I’ve been told it has a tangerine-like aroma).

The color is similar to a Brown Ale producing a beige fluffy head. I’m still trying to pin down the aroma, but finding it hard to explain. It is different than most beers very dry, spicy, chocolaty, nutty, biscuity, hay-like, and hints of cinnamon. I do get a big hop presence that stands on its own while adding to the rye experience. Fruity citrus notes dominate and you can tell you’re about to dive into an IPA-like beer.

The taste is also very different and unique. I can sum it up in one word…sharp! When you first take a sip your mouth is almost shocked by the bitterness and dry rye spiciness. It really was a new experience. It finishes the same as it started leaving behind a bitter mouth smacking texture. I’m sure the rye helps add to this. Towards the end the darker malts do come through providing a pleasant Brown Ale smoothness of caramel and chocolate notes before the finish.

I found this beer exciting, unique and interesting (thanks Mike Lundell)! Give it a try for yourself.