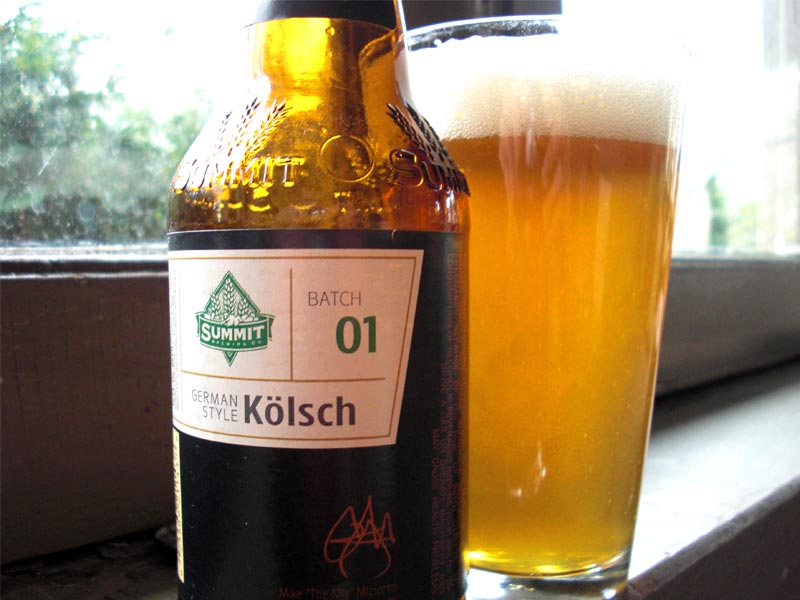 Yet another strange tale from the annals of German beer. This Kölsch isn’t really a Kölsch. Neither is any Kölsch you’ve ever had…unless it was brewed in Colgne (Köln), Germany (following certain brewing instructions, of course). Yet clearly, German regulations about only brewing a certain style of beer in a certain city aren’t about to stop American craft breweries. This unique style is being copied all over the US, and we should be thankful for that.

Summit’s offering poured a somewhat cloudy straw color…although no wheat malt is used in the brewing. The smell was fruity and fresh, and there was loads of carbonation. You can tell just by looking at it that this is a summer beer through and through.

Apparently Kölsch isn’t really a lager, though. Or perhaps it’s more of an ale-lager hybrid. It’s top fermented at a warmer temperature, and then lagered later in the fermenting process. I’m interested to know what subtleties this creates that are unique to the style…but as for my still developing taste buds, it was all lager to me. It’s nicely balanced, and therefore a great session beer. This one has mild toasty malt upfront and some spicy, grassy bitterness from the hops to finish; flavorful, but not overpowering in the least. The yeast used also adds a nice little “fruity” crispness, although I’m not sure what fruit, really. But it doesn’t matter. In the 5 to 10 minutes I spent trying to determine what exactly it tasted like, I drank three quarters of my glass. Probably the most refreshing beer I’ve had since last Fall.

I’m actually left wondering whether the refreshing factor could/should push this beer into A- territory. Kölsch seems perfectly suited for the dog days of summer, and Summit’s is extremely palatable. Unfortunately, I don’t have a plethora of Kölsch (Kölsches?) under my belt to compare it to. And the sweltering Chicago heat isn’t here yet. Still…bravo, Summit.