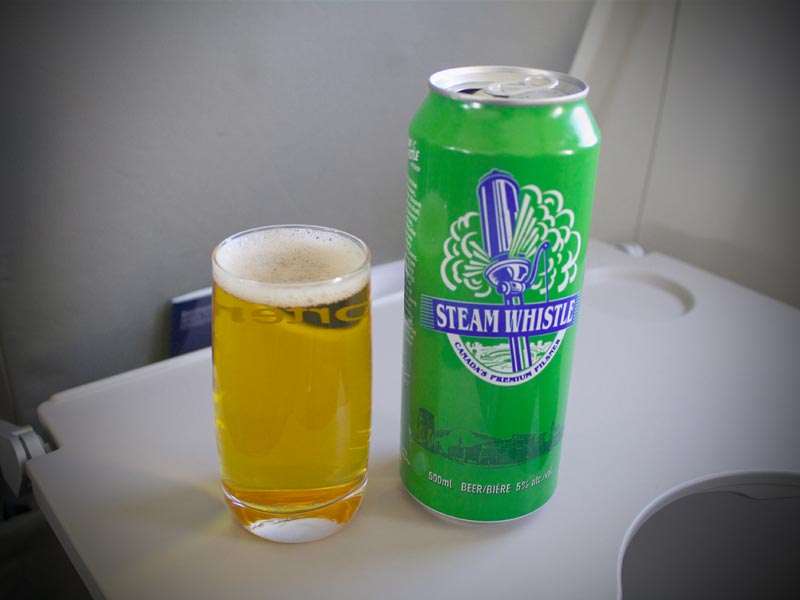 As you may have guessed these are not the specs of the beer I’m reviewing. They are in fact, some of the specs of the plane I find myself in as currently I am flying somewhere over central Ontario from Toronto to Chicago. At least 20,000 feet high up, straddling the atmosphere and the surface of the earth (I have no idea how far up the atmosphere is), I have a few companions along for the journey: the other dozen and half passengers on this twin prop jet, my computer, Ryan Adams (ipod), and the gratuitous Steam Whistle Premium Pilsner. This is a fine airline I’m flying I must say; a pleasant experience thus far.

As I began to partake in this fine pilsner it didn’t initially occur to me that I could review it. Shux, I thought, I wish I had brought this brew back stateside to ponder over and enjoy. However, later it dawned on me that with camera in tow, and the real glass cup the stewardess offered me, this was as good a place as any to do a review.

I have no aversion to beer in cans. It is quite European and up in Canada quite commonplace. Beers from the likes of Stella Artois to Red Stripe can be found in pint size cans at pretty much any liquor store. (However, I would have had a hard time doing a review without the glass.) I also have a small personal history with Steam Whistle. Picture a weathered, semi-circle, brick building large enough to house several locomotives. Now picture that building again in Canada’s largest city’s downtown. The only element that sets apart this building from the likes of skyscrapers like the CN tower is a beautiful field of tall, wild grasses and perfectly nestled park benches. A few years ago I immediately took notice of this structure from the Gardiner expressway, which runs between Lake Ontario and downtown Toronto (Chicagoans think Lake Shore Drive). This was the perfect backdrop for a documentary film (albeit quite amateur) that I had come to Toronto to film. All this to say Steam Whistle, the brewery that is housed in this ancient locomotive house, is nothing new to me. However, even on my last trip to Toronto almost a year ago I was not even close to the beer snob that I have become.

Considering my personal history with this company, despite it having nothing to do with actual taste, I will start out by saying that this is a wonderful and refreshing pilsner. Its appearance and pour are like that of any other pilsner. The taste is everything you hope for from a quality non-massed produced pilsner. It is crisp. It is the perfect balance of malt and hops for the style. I liken it to a well-cooked piece of fish that is perfectly seasoned. The seasoning being the hops and the fish being the malt. You want to taste the lightly malty taste that the barley brings and the hops in this beer allow for that. They do not run the show. They only bring forth the flavor they are meant to bring forth. And, last but not least, truly my favorite part of a pilsner, the yeast. What can I say? Yeast tastes and smells like yeast to me. But what makes this so pleasing is that it is refreshing and in perfect quantity.

I know many of my favorite ales and lagers await me in Chicago. Ryan Adams sings Dear Chicago, you’ll never guess… Although he goes on to sing about a beautiful women and love, I extrapolate something else, something entirely different and out of context.

Dear Chicago, you’ll never guess but I just had this incredible pilsner from the Canadian version of you. Well done Toronto.