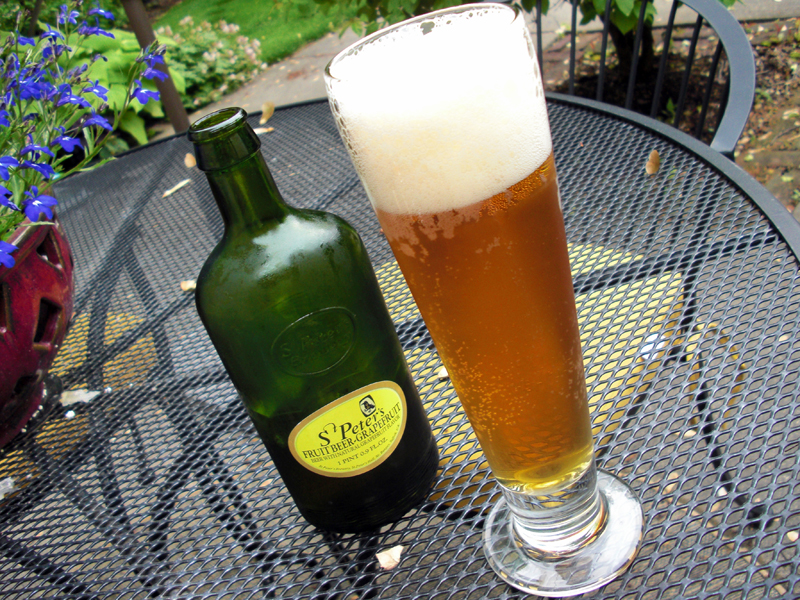 If you’re any sort of hophead, you know that grapefruit flavors abound in beers these days, especially among the American Pale/IPA family. But these flavors all come from hop cones…which are hardly similar at all to real grapefruit. So what happens when a famous English brewery puts the actual thing, natural grapefruit flavor (whatever that means), in a mild mannered wheat beer?

Well…no one will be confusing this one as an IPA, but it’s definitely got its own character. “Fruit beer” has always seemed a strange style to me, as it gives no indication of the beer’s “main” ingredients (water, malt, hops, yeast). In St Peter’s case, they tell us it’s basically their Wheat Beer with grapefruit flavor added, which helps a bit, but not much. In reality it pours and even smells more like a pilsner to me…albeit with a not-so-subtle hint of grapefruit. Unfortunately, it’s not exactly the most “natural” grapefruit smell; it’s more like those sugary grapefruit slice candies you get at the dollar store. I was hoping for a fresher, zestier tang in the nose…but it’s fruity and bready and not at all unappealing.

A grapefruit beer seems destined to be a great summer beer, and upon tasting St Peter’s offering, that assessment is right on. Perhaps not in the way you’d expect, though. Here’s the thing: you can tell this brew wasn’t designed around grapefruit. It’s just an already well-designed beer that happened to have grapefruit added to it. And it’s actually the light malt body, high carbonation and mild yet flavorful yeast and hop notes that make the beer. The grapefruit is certainly there, and it adds uniqueness, nuance, and a bit of sweetness. But it’s not anything special, and unfortunately suffers from tasting a bit artificial when placed alongside the (go figure) more natural flavors found in the wheat beer.

That being said, I had no problem polishing off a 500mL bottle; it goes down about as easy as any beer I’ve had in recent memory and can certainly be placed in the “refreshing“ category. If you consider yourself a grapefruit purist you might be in for a bit of a letdown. But if you like tasty light beer and citrus candy, have at it.