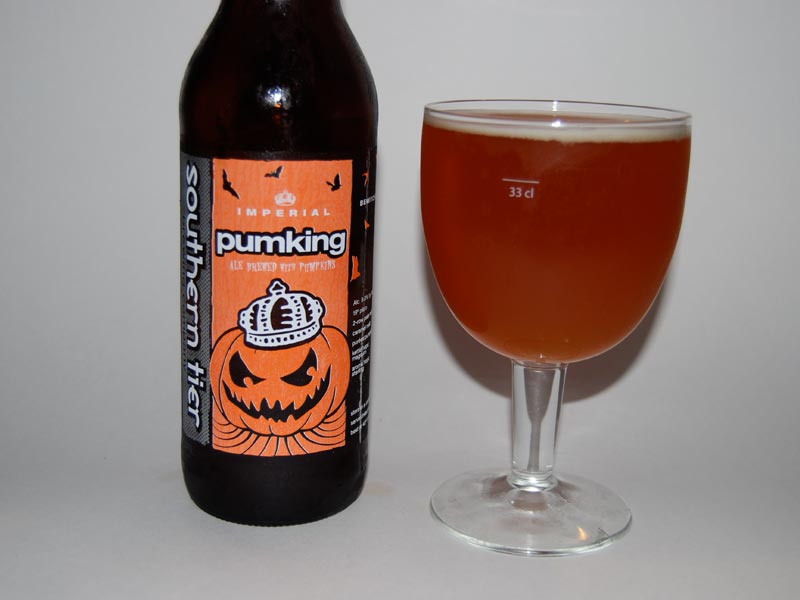 Michael:  Each year, come autumn, I find myself craving pumpkin. Pumpkin bread, pumpkin pie, pumpkin lattes and, yes, pumpkin beer. In previous reviews, I have confessed my enjoyment of fruit beers and to the high-browed beer connoisseur, I’m sure Pumking is just another immature, girlish blend. To me, however, it is fall at its finest. Last season, I drove 30 minutes one-way to the only Binny’s in my locale that had any of these beauts left on the shelves. This year, however, I came across this bottle at my favorite beer store, Dennis Brothers Liquor of Cottage Grove, MN, just a few weeks ago. The owner had been storing it and said after a few months in the cellar it was tasting pretty good. I tend to agree.

It poured a rich, deep copper that is steady and solid. The head, which I hoped would be a billowy white, like whip cream atop a pie, was instead gone in an instant. The scent was rich and complex. Sweet caramel, cloves, cinnamon and, of course, pumpkin, blended together in a perfect way. On the nose you practically forget its a beer, but the taste brings you back. The pumpkin settles down substantially in your mouth and the alcohol is forward and lingering. A combination of 2-row pale malt and caramel malt give it a sturdy backbone, practically overwhelming the hops they claim has been used. But it does finish slightly bitter, so I guess the hops showed up in the end.

While another decent creation from Southern Tier, I almost wish it tasted like it smelled. But then again, I suppose it is indeed a beer and should taste less like a bread than a brew. If you’re seeking a good pumpkin ale, try this, but don’t leave your liquor store without also grabbing a bottle or two of Hoppin’ Frog’s Hollow Double Pumpkin Ale. Grade: A-

Tom:  Pumking…I’ve heard much about this beer and how good it is, but have never tried it.  This Aug-Oct seasonal beer boast a higher abv than most pumpkin beers on the market hence its “imperial” title.  Using pureed pumpkin in either the boil or fermenter (not sure which) this beer embodies a rich full, but not overpowering, pumpkin aroma and taste.  That much is true.

The appearance was interesting in my experience.  I poured half the bomber into a nonic glass which produced a rolling head that capped the orange-blond beer.  When I poured the remainder of the bottle into a goblet the head barely formed and looked similar to Michael’s picture.  I attribute the rocky head (which fades fast) to the higher abv.  Giving it the Hopry “swirl” (we miss you Mark) you will find it has some legs on the sides of the glass.

What I found in the aroma was nothing short of a hazelnut coffee creamer.  Seriously.  Visit a breakfast place and order a coffee, then crack open a brown hazelnut creamer and you’ll recognize the aroma of this beer.  While this is not a bad smell at all, it threw me for a fast loop.  Essentially, it was smooth.  The abv was hidden well as the spices of nutmeg, cinnamon and vanilla filled the air.

Time for the taste and it did not disappoint.  Note:  I’ve found that the higher abv pumpkin beers end up tasting the best.  This is due to the fact that the high alcohol makes the mouthfeel lighter allowing you to feel refreshed by the spices rather than feeling weighed down by them.  It was clean and nutty all the way through.  Tasting like pumpkin by mix from Morton, IL. (pumpkin capital of the world) it did lay down a great flavor every sip.  I would recommend giving this beer a try every Fall if you get the chance.  Grade A-