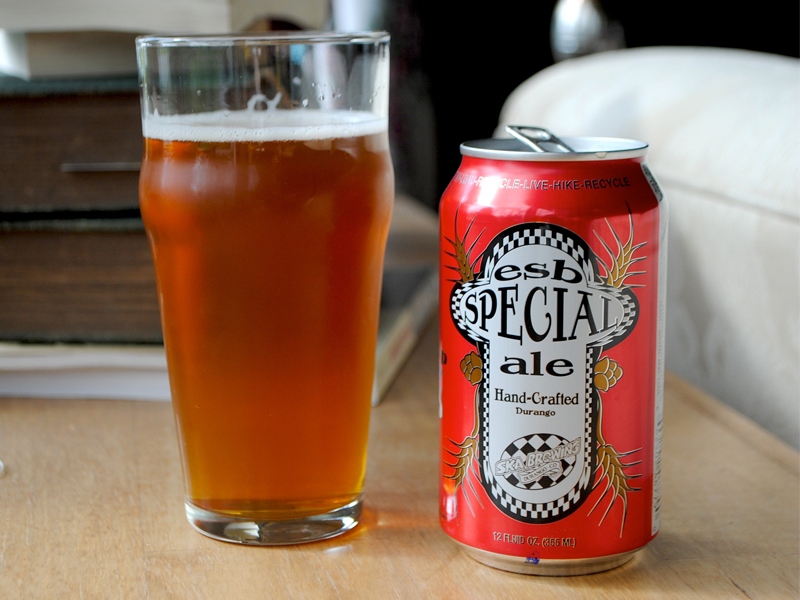 There are a lot of stigmas attached to canned beer. Everyone associates it with something different. For me, growing up in the “Rust Belt,” it was the workingman’s beer. For others, it became the fisherman’s beer, or the teenage party beer, or the cookout beer, or the tailgater beer, etc. etc. But I think what often ties these all together is the notion of how portable canned beer can be—that, and canned beer is usually the cheapest franchised crap out there.

This is why Ska Brewing Company brags that its Special ESB (English-Style Bitter) Ale was the second microbrew in the nation to be sold in cans since the American Microbrew Renaissance. On any given shelf in any given liquor store another canned beer would hardly be noticeable, but with the majority of microbrews still brewed in bottles I couldn’t help but notice this aluminum-plated bombshell. I just had to try it.

First came the pour. Seeing as you never know what to expect when pouring out of a can, I was surprised by the ESB Special’s light body. It had a bright, copper tone, and it was crowned with a cotton-white head. As far as looks were concerned, this beer was beautiful. It fulfilled that primal expectation of how a beer should appear in a glass; that is, until the head dissipated too quickly after the pour. For me, this was strike one.

The smell of the beer was a delightful mix of sweet and hoppy, but more than anything it smelled sweet. Ska Brewing Company’s website said “tart fruits.” Which fruits? I’m not sure. It seemed more like honey to me. Perhaps the malts were teasing me.

My first sip was strange. The bitter Galena hops and pale ale malts raced to my tongue, and it was hard to say which came first: the sweet, or the bitter. I like to think the sweet, only because that’s what seemed to happen more often than not with every following sip. And that’s one of ESB Special’s biggest downfalls: two very different flavors and mouthfeels volley for control of the palate.

It was sweet, and then bitter, carbonated, and then smooth, and then it was bitter again. And if the sweet was generally the foretaste, the bitter was generally the aftertaste: a bitter that left the palate, well, filmy? There’s really no other way to describe it. I’m not a doctor, nor a chemist, so I won’t even try pretending to explain how this works. But I got a second can just to double-check and it was the same experience. The aftertaste was bitter, filmy, and parching.

So here’s my final beef with Ska’s ESB Special: for a beer that boasts such a flexible drinkability that its can encourages you to take it with you when you “golf; luge; BBQ; toboggan; fish; Luau; live; hike,” it’s neither refreshing, nor drinkable enough for me to want it in any of those situations. Ska Brewing Company is a really fun brewing company. They have a great sense of humor (something more microbreweries could attempt), an excellent taste in music, and they make beer fun. From what I’ve heard, their Hopus Operandi is supposed to be phenomenal, and it is also canned! Unfortunately, no matter how much fun ESB Special was, it wasn’t what I had hoped for, or even liked. Overall, I’d give the ESB Special a C-. It was fun to read, lovely to look at, but not very good to drink.