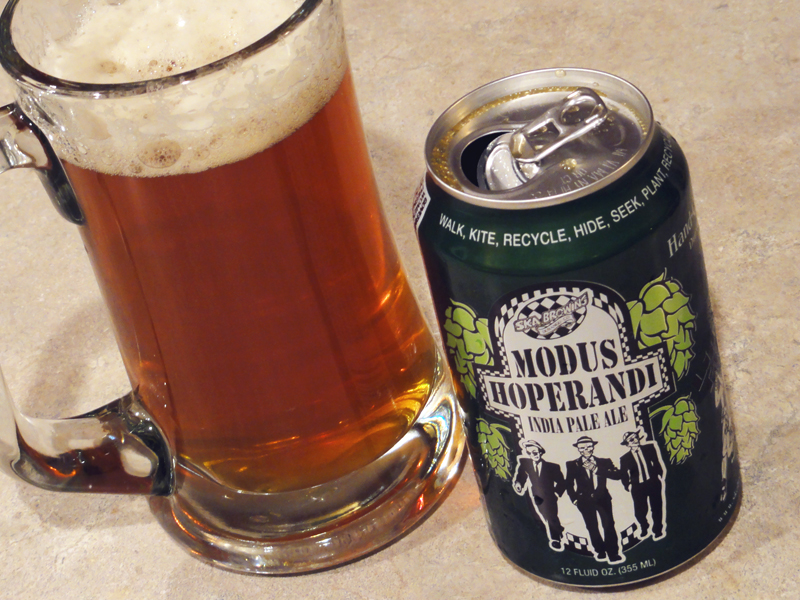 I have to confess. I’m a hop junky. Ever since I got hooked on the little, lupulin filled green cones it’s like I can’t get enough. In fact it’s hard for me to genuinely remember what I was thinking the first time I tasted an IPA and thought, “Man this is bitter.” Truth be told, nothing tastes bitter to me any more. Every since I started my love affair with hops I’ve been upping the ante; the more over the top, the better. I’ve built up a hop tolerance and as a result I usually have a hard time enjoying most pale ales and even some IPA’s. I taste them and just want more. I wish pale ales were IPA’s and IPA’s were double IPA’s. Its a rough existence never being satisfied with the amount of hop in your beer.

Honestly Modus Hoperandi is one of the few straight up IPA’s that I still really enjoy. I remember the first time I had it, thinking to myself, “It comes in a can? What kind of low brow operation is this Ska Brewing company” I mean, craft beer is supposed to be high brow and snobby right? That’s what I love about Ska Brewing. They were pioneers in craft beer in cans. They don’t take themselves too seriously, except when it comes to the taste of their beers. For instance take their description of Modus Hoperandi: “It’s old man Bitter. A mix of citrus and pine that will remind you of the time you went on a vision quest with your Native American cousin and woke up in a pine-grove full of grapefruit trees.” No overly complicated descriptions here, just having fun and making great beer.

Modus Hoperandi is a really straightforward, no nonsense IPA. I feel like they weren’t trying to be too fancy with this one at all. Its’ all about the hops. It pours a deep golden orange, with a thick off white head, which quickly dissipates. The aroma is all hops, a blend of citrus and pine, with a slightly deceptive hint of sweetness on the nose, as if your tongue weren’t about to get punched with bitterness. The flavor is essentially hops the whole way. A slightly citrusy/tart first impression gives way to a lingering grapefruit rind bitterness. There is just enough caramel sweetness to provide enough balance for it to be enjoyable. Make no mistake about it though, this one is tilted towards bitter and hoppy.

Overall, Modus Hoperandi is about as good as a standard IPA gets. Its really hoppy and bitter, but balanced enough to be enjoyable. It might not be a great IPA to introduce a new beer drinker to, but if you’re like me and have a love affair with hops it’s the kind of IPA that will remind you why you fell in love with the style in the first place.