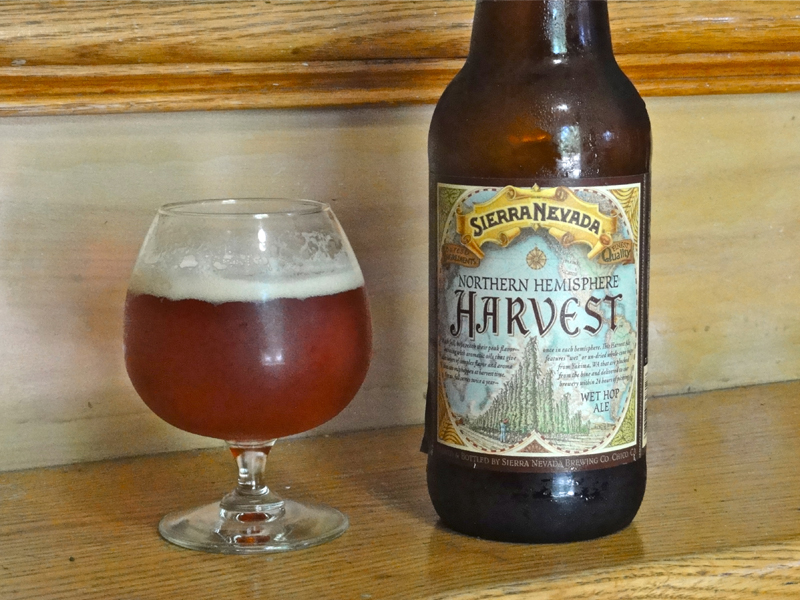 Sierra Nevada is practically craft beer royalty. Founded in 1979, they were years ahead of their time and blazed a trail that craft brewers have followed ever since. Not only were they pioneers in brewing high quality American Ales, but they essentially introduced the United States to hops. Prior to Sierra Nevada’s flagship Pale Ale, America may have known that hops were in beer, but they didn’t know what they actually tasted or smelled like. I still remember my first craft beer variety pack from World Market. The only beer I could distinctly recall was Sierra Nevada’s Pale Ale. Its hoppy character tattooed itself into my brain.

It was this same spirit of hoppy innovation that lead to Northern Hemisphere Harvest Ale. The same company that introduced America to the hop also lead the way in pioneering the technique of “wet hopping” a beer. Hops are normally harvested, dried, and then frozen until use. The hops used in Northern Hemisphere Harvest Ale are harvested and used in the boil the very same day, which lends a distinct fresh resiny character to the beer. Interestingly they also release a southern hemisphere hop ale every year which coincides with the southern hemisphere’s hop growing season.

Appearance: It pours a deep copper with about an inch and half of thick, slightly off white, cream colored head. It’s mostly clear, but not see through. I would almost say it glows a bit.

Aroma: The aroma is well balanced between hop and malt. It comes off as a bready, hoppy scent with the slightest hint of alcohol. The resiny aroma of the fresh hops really comes through, but not in a punch you in the face IPA kind of way. There is also a slightly sweet caramel aroma present.

Mouthfeel: This beer is medium to full bodied and on the high side of medium for carbonation. Each sip dances on your tongue.

Taste: The Cascade hops lend a strong grapefruit bitterness character to this beer, but it is not super citrusy as is the case with many American IPA’s. This beer is in the IPA bitterness range, but certainly isn’t a pure IPA. It’s a good deal maltier than most IPAs and well balanced with a slight caramel sweetness. The taste finishes with a lingering bitterness that is just slightly shy of being overdone.

Overall: This is a very enjoyable sipping beer which seems to defy categories, residing somewhere between an IPA and a Brown Ale. Its malt character is quite pronounced but subdued enough to let the hops shine through. This beer is definitely about the hops, but succeeds in not overdoing it. This isn’t a gateway beer to introduce people to hops, so naturally hop heads should love it. I poured a snifter of it and noticed that the flavor profile changed pleasantly as it warmed a bit. Its 60-65 IBU’s are misleading as the bitterness is quite featured in this beer. It almost comes across as 80+ If you’re into hops this is a beer you should try, but don’t expect it to be an Imperial IPA, it’s more nuanced than that.