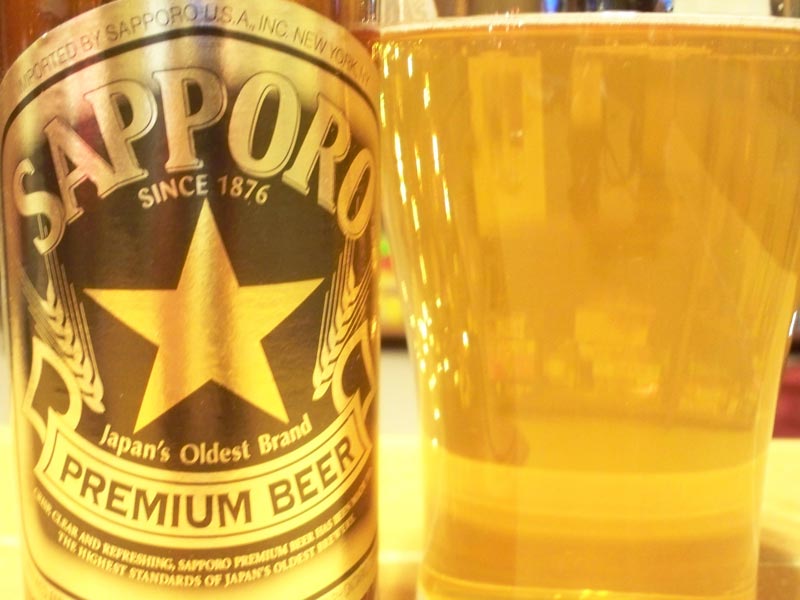 Britton: Japan is not a country that comes to mind when I think of beer. There are many great beer producing countries but after trying this one from Japan’s oldest brewery, I wouldn’t say Japan is one of them. I have to admit, I bought this one out of curiosity. I’d skipped over this one for awhile and I finally decided to give it a try.

It poured a golden color with a small head. I had to do a double take after I smelled it because I thought I smelled rice. I took another whiff and there defiantly was a smell of rice with hops. The taste followed the smell of beer. It had a hint of rice flavor to it. Overall it was similar to any cheap beer you would buy in the United States – except not as good. I would put it on the same level of Natural Ice and Milwaukee’s Best rather than Bud Light or Miller Light. Don’t waste your time with this one. If you are going to be picking up a cheap tasting beer – get one priced like a cheap beer should be.

While I desire to visit Japan someday, I have no desire to revisit this beer. Grade: C

Taylor: Ever since I seriously got into beer, my enjoyment of lighter varieties has continued to plunge. I can barely sip a Coors Light or Miller Lite without thinking “what a waste of precious stomach volume.” Surprisingly though, the lighter rice lagers typical of the Asian region have remained palatable. Sapporo Premium Lager, brewed by Sapporo Brewery in … you guessed it … Sapporo, Japan, is no exception.

Sapporo Premium (“Draft” elsewhere) pours a crystal clear light straw color out of its famed silver can. Smells like a light lager, with the characteristic grainy rice aroma. Tastes crisp, refreshing, faintly sweet and evenly (minimally) hopped. Finishes easy, not bitter. I’d say it’s got enough taste to defeat the American Adjunct hands down. It’s unassuming. Were I to buy a light beer in a large amount, I’d definitely consider Sapporo. Grade: B