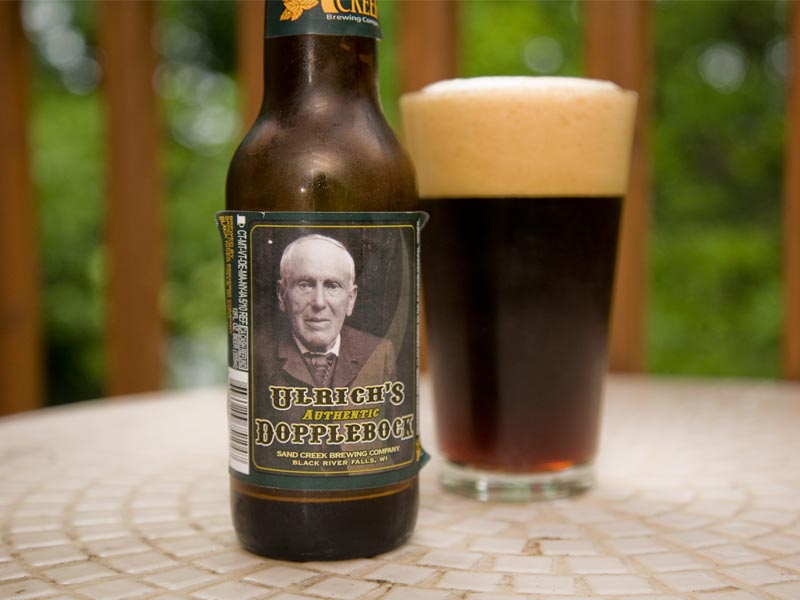 Sand Creek Brewing Company is a locally praised operation out of Black River Falls, Wisconsin. They distribute only in the Midwest, to Wisconsin, Illinois, Minnesota and Iowa. I was lucky enough to have a friend who went through there grab me some of their Ulrich’s Authentic Dopplebock, which must be a specialty/seasonal offering of theirs, as there is no information whatsoever about the beer on the company website.

The beer poured a dark brown color, with a great tan head … I thought it was a good-looking beer after the pour. The nose was very strong, heavily roasty and malty, with a slight hop bitterness. After smelling the nose I thought that I was in for a really strong doppelbock.

And my inclinations were confirmed upon the first sip. Wow, is this one a palate-kicker! I wish my palate was more developed for doppelbocks, but something about this beer goes too far, like the brewmaster go side-tracked and put too much ingredients in the mix. The taste is an unforgettable damp, musty-sweet, and bitter experience. Without a doubt there was a prominent presence akin to black licorice … that tangy aftertaste that you can never quite put your finger on. Or maybe you could say it finishes like a bottle of soy sauce.

Either way, the great “liquid bread” dominance of the doppelbock was lost. And I’m not so sure where it went. Somewhere far away from Ulrich, that’s for sure.