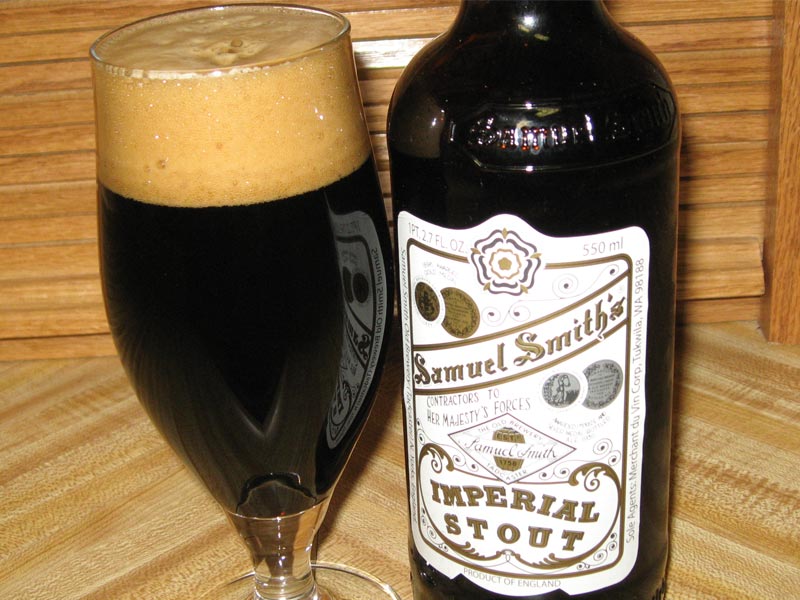 Continuing with my fascination with Samuel Smith brewery I picked up a bottle of their Imperial Stout of which I’ve only heard great things. With high expectations I cracked open the gold leafed top and slowly eased the contents into my glass. It was black as can be with minor garnet highlights. The head was dense, creamy, and caused me to ponder what coffee flavored Cool Whip might look like.

I was actually rather surprised at my findings. Samuel Smith’s rendition came in at the low end of the spectrum for Imperial Stouts at 7% ABV. Most beers in this style have a higher level and smell of alcohol. I did not get a big nose, but rather a minor hint of it. I like the fact that it had some similar aromas as pervious beers. The way they ferment their beers gives a distinct and pleasant feature. My estimation is that they do so at warmer temperatures allowing the yeast to product fruity by-products (esters) in the beer. There were hints of apples, raisins, dark fruit, prunes, peaches. Interesting for an Imperial Stout. It also had your typical burnt barley, roasted grains, rich chocolate, licorice, and coffee appeal.

The body was full and rich, but not heavy. There was a subtle sweetness to it and lacked some of the astringent flavors found in most beers of this style. I’d define it as a mellow, soothing, easy sipping Imperial Stout that newbies could stomach and get their taste buds accustom to the style. I guess I put it closer to a Porter than an Imperial Stout. The aftertaste encompassed all the flavors and aromas listed above. I’m dropping this down a grade because I don’t think it embodies all the qualities of an Imperial Stout and it did not live up to the hype.