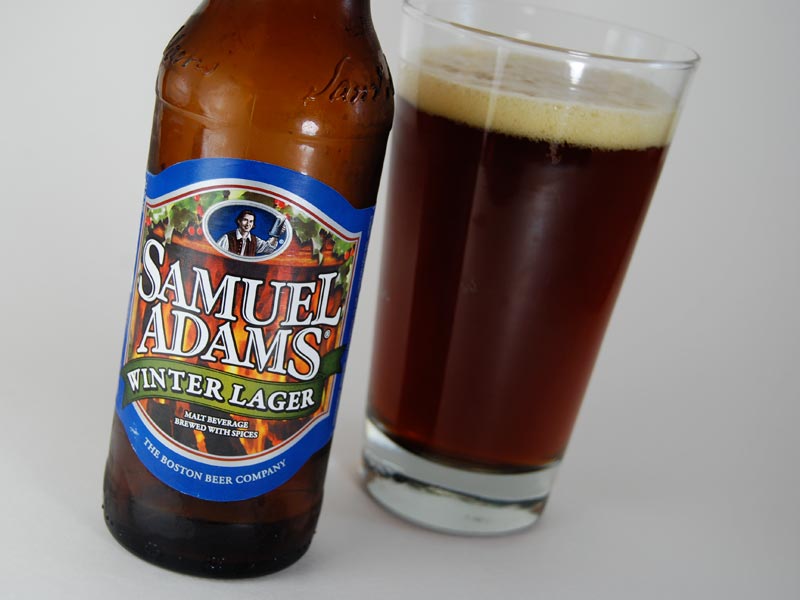 Brett: What to swig after lunch on a 7 degree winter day? Ahh…a seasonal brew of course! Like the brew master Jim Koch explains “This rich and hearty lager is one of the finer pleasures of a winter evening.” Well said Jim! I have always been fond of the consistent quality Samuel Adams offers to its many samplers. In fact, I’m gonna throw snowballs at the next person I see without a six pack of this stuff…

This dark wheat lager is a caramel colored brew that is clear and inviting. It smells of caramel, orange/citrus, possibly ginger along with other spices. It tastes nutty with hints of citrus which impressively meets the demands of my taste preference in the winter months. There is a nice balance of flavors in this brew which allows it to slide right down with a smooth finish. The beer seemed a bit flat, however, this did not distract me from fully enjoying this winter beer! After the first one was gone I had to have another…I think most of you will too!

Good brew, good price and perfect on a cold winter night! Grade: B+

Michael: Winter is here. Officially. No, there’s no snow on the ground and its not because a certain date has past or a specific temperature has been reached. Its because The Boston Beer Company has released their Winter Sampler Pack. For $20.99 at Costco. Now that is a reason to love winter.

My first pick from the litter was the Winter Lager. The body of the beer was a rich mahogany, the way mahogany is supposed to be, not too brown, not too red. The head was a single finger, somewhere between eggshell and tan. The scent was rich in spices, cinnamon and yeast. The taste was slightly disappointing. While it was meaty and rich, it was basic, a no-frills, straight-and-narrow-type vibe with no variation or surprise. The center of my sip was bubbling with carbonation and orange peel, melting into a grainy, malty mix. There was a metallic flavor at times and an unpleasantly alcoholic finish. It had a caramel aftertaste which was rich, sticky and lingering. Grade: B