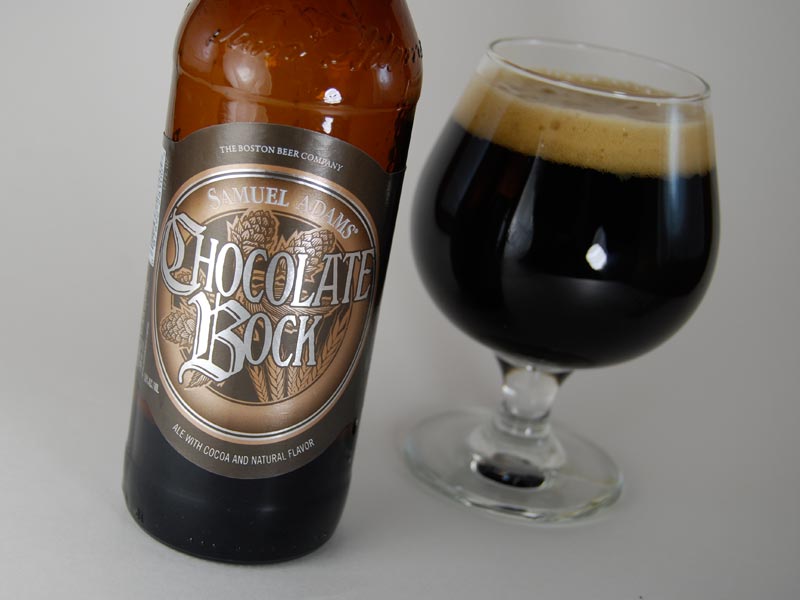 We’re having a late dinner tonight, it got pushed back so the fresh, goodness-stuffed basil ravioli in the fridge will just have to wait another hour. With a bit of time to kill, a brew felt right. And tonight, I decided I would have dessert before dinner. So Chocolate Bock it is.

I didn’t know what to expect, really. I don’t think I’ve ever had a beer of this style, so if you’re a Bock-aholic, you may want to find an opinion infused with a bit more experience. I digress. From this point of view, this bock is black. Even held up to the light, all I can see is my reflection in the marble-like surface. An uneventful head was present initially, turning into a boring bit, floating like an ice ring in the holiday punch. Expecting chocolate, my nose got some, but not pure and straight, rather a little, well, off. It wasn’t malty either, but instead almost as though chocolate had been warmed, maybe burned a little and then doused in sugar. It was intriguing, so I held judgment until the sip. That’s when things got a bit more interesting. While not particularly complex, it most definitely matured on the scent. The malt foundation was there, with a stinging core of dirty chocolate and molasses. It was a bit boring, flat like a root beer out in the sun too long, and finished both earthy and bitter. An average choice, it seems like a middle child, an unexciting alternative to many better choices.