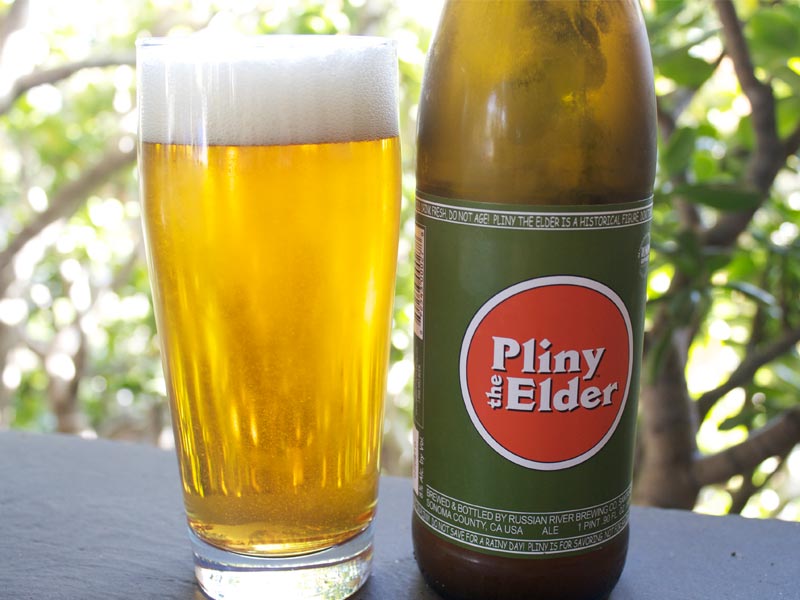 Well, here it is. This is the quintessential double IPA from California. We are hop heads out here. Everyone knows that and everyone out here loves Pliny the Elder.

Double IPAs are not my typical go to. But I do go for beers that get a lot of talk. I’ve gotta judge the hype for myself. I’ve also had some ridiculously good beers from Russian River as well so why shy away from this one? I am looking forward to a trip up north to Sonoma County later this month in which a few friends and I will take a trip to this fine brewery.

I opened the abnormal 500 ml bottle and mistakenly thought I sliced open a tart grapefruit. It has that much of a tart grapefruit aroma and the taste is similar. More than anything the hops in this beer have this taste and aroma. Secondarily, there is a faint piney (not Pliny) aroma and taste. This is a bitter beer. It comes in at 100 IBUs. It also 8.0% ABV. You feel both. It is extremely fresh and Russian River implores you to drink it so. Freshly hopped beers are NOT meant to be aged and they alert you to this on every label of Pliny the Elder.

I’ll finish off with a little history about Pliny from the brewery because it provides some beer education and is interesting:

Pliny the Elder was a Roman naturalist, scholar, historian, traveler, officer, and writer. Although not considered his most important work, Pliny and his contemporaries created the botanical name for hops, “Lupus salictarius”, meaning wolf among scrubs.” Hops at that time grew wild among willows, much like a wolf in the forest. Later the current botanical name, Humulus lupulus, was adopted. Pliny died in 79 AD while observing the eruption of Mount Vesuvius. He was immortalized by his nephew, Pliny the Younger, who continued his uncle’s legacy by documenting much of what he observed during the eruption of Mount Vesuvius.