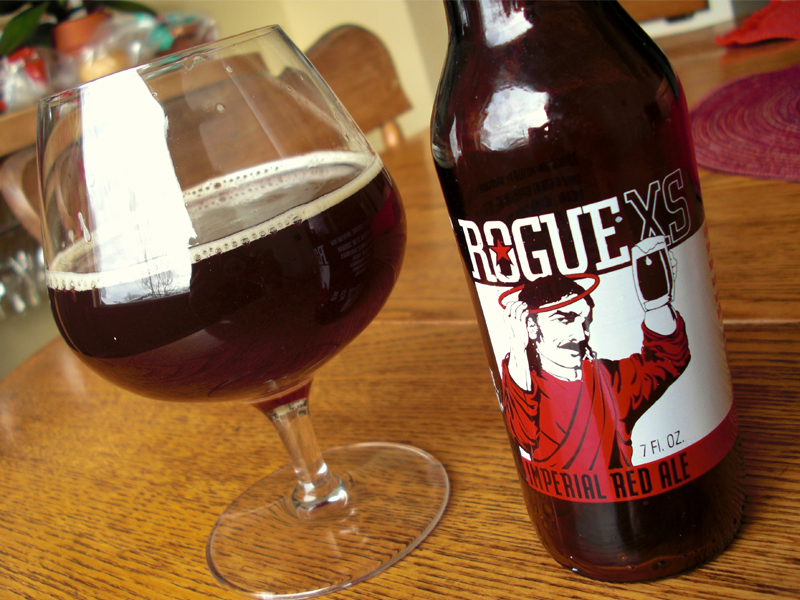 Noel: The Rogue XS series beers aren’t exactly winning the hearts of craft beer lovers through generosity. These dinky 7 oz. bottles make even a regular 12 oz. longneck look like the Sears Tower. So clearly, what it lacks in size, it makes up for in flavor, right? Luckily, in this case, yes.

An Imperial version of the Dry Hopped Saint Rogue Red it is not (although their bottles share the same robed, Jesus-like figure), but the XS Imperial Red still pours a reddish brown color. Different malt and hop recipes set the two apart, and upon first whiff, this XS series reminds me more of Scottish Wee Heavy than a red ale. There’s a roasty, peaty caramel aroma in the nose with a heavy dose of booze. The mouthfeel is a little thinner than one might expect (although at around 8% ABV, it isn’t a very strong Imperial), with a decent bit of carbonation, but the flavors are awesome. You expect it to be sweet but are instead hit with a spicy hop bitterness and hints of chocolate and toffee. That peat-y roastiness lasts through the whole sip, and I still can’t believe this isn’t a Scotch ale. There is also a hint of fig or some other dark fruit in there. It’s all executed so flawlessly, the balance is perfect, and there are no off flavors to speak of. Alcohol lingers in the background throughout, but doesn’t sting your throat. Yum.

Perfect for a snowy day, and dangerously drinkable and refreshing for an Imperial. John Maier does it again. Grade: A

Tom: Topped with a nice tan/reddish head this deep amber brew was the cause of much excitement. I love Rogue’s Red Ales so my hops were high. The aroma was sugary, maple, toasty, caramel, and only had a light fruity hop quality. It did not have the same dry hopped aroma like the other Reds which I found disappointing. Sipping the 7 oz left a very predominate caramel taste similar to that of an Irish Red ale. There was a slight boozy quality towards the latter half of each sip, but for the most part it was fairly tame. I did notice a minor chocolate/biscuit combo mid palate and the hops never really impressed me like I had hoped. Overall, I thought this was closer to wee heavy (80 or 90 schilling). Grade: B