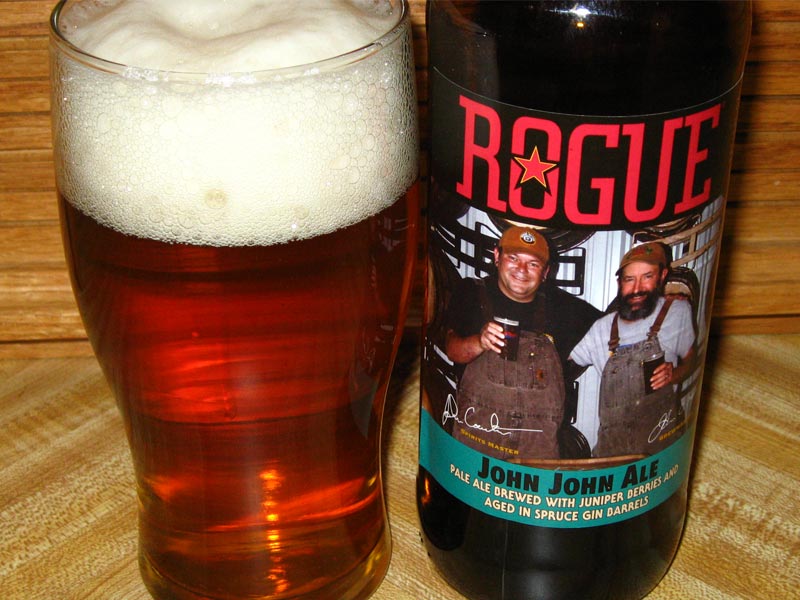 Glancing over the “new arrivals” section of my local store my eye caught a few Rogue beers. It didn’t take long to pull the trigger, disregarding the beers I came for and making the purchase. One of the bottles that I happened to pick up was the second of a series of John John Ales. These beers are a collaboration between John Maier (the brewmaster) and John Couchot (the spirits master distiller) as they age certain beers in various barrels used to make Rogue Spirits. The first brew released was Dead Guy that had been aged in Dead Guy Whiskey barrels (see pervious review). This most recent beer is the Juniper Pale Ale aged in barrels that held their Spruce Gin.

I remember having the Juniper Pale Ale about a year ago and getting my socked rocked off by the fresh hoppy aroma and the unique juniper berry flavor. Back then, for some odd reason, I could not find a reference point for the juniper berries taste. About a half year later I found out it’s used to spice Gin. Where had I been? The Pale Ale in and of itself was delicious. A great light malt aroma and finish complimented the hoppy and spicy berry notes.

The ingredients used to make the Spruce Gin are as follows: spruce, cucumber, angelica root, orange peel, coriander, lemon peel, ginger, orris root, grains of paradise, tangerine, and juniper berries. Interesting to say the least! Given that gins usually have a dry finish I was expecting a similar finish to this beer.

What I found was a completely different. It was almost mouth watering and very refreshing. The color was a pale-golden hue and developed a foamy egg-shell white head. As you can probably image the aroma was very colorful, yet mellow or smooth. The spruce aspect made me reflect back to cutting down Christmas trees with my family, the lemon and grains of paradise recalled warm summer days sipping a Sam Adam’s Summer Ale, and the juniper berries made me think I was diving into a well spiced gin. There is a very floral, spicy, fruity nose to this beer so I would suggest serving it in a snifter or tulip glass.

The flavor is crisp, cleansing, and on the lighter side. I do think the aging decreased the hops presence somewhat, but over all the beer is well rounded for a pale ale. At first I’m met with a light bodied mouthfeel and sweet malts. It then moves into a spicy spruce middle where you can detect the residual alcohol from the gin. The beer itself is 5.2% so you’re in no risk of finishing a bomber yourself. At the end it finishes like a dry gin, but the malt components stick around. I would say the choice of beer and barrels used works very well together.