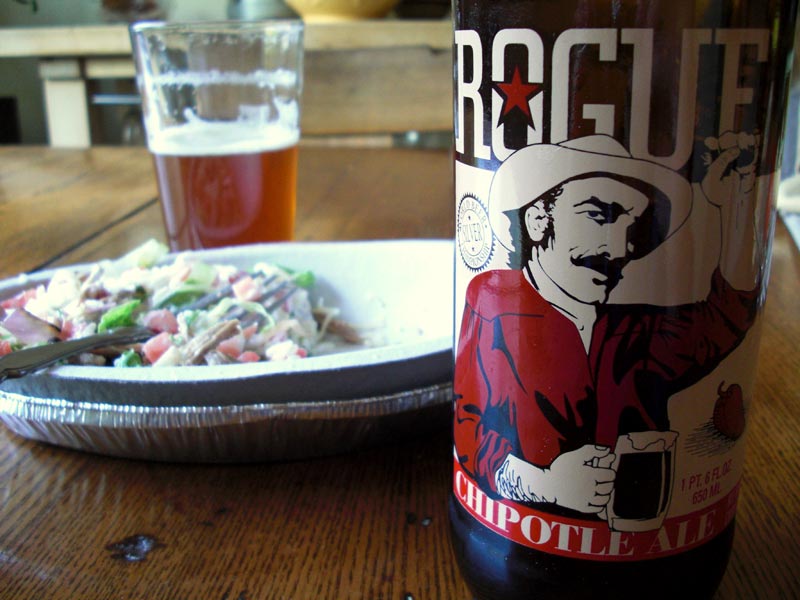 As I peered into the refrigerator today, hoping something would grab my eye (and stomach) for lunch, I noticed my bottle of Rogue Chipotle Ale behind a tub of Papa Charlie’s Italian beef. It was practically screaming “Drink me!”, and I’m really not one to refuse a John Maier creation. But before I could reach in to pull it out, my stomach gave my mind an idea. What could go better with a Chipotle Ale…than a Chipotle lunch? Two miles in my car and $6.99 later, I was staring at a full glass of beer and a Carnitas Fajita Burrito Bol.

The beer and food paired excellently; one warm and spicy, the other cool and smoky. But I’ve gotta be honest…I still like this brew best on it’s own. For those in the dark, “chipotle” is really not a variety of chili pepper. It’s just the word used for a jalapeño that’s been dried and smoked. True to it’s name, this beer has all your standard ingredients (water, barley, hops, yeast)…and then smoked jalapeños for an added kick. Sounds somewhat crazy, but it ends up working.

The beer is still beer; a delicately roasted malty body with a slight hop presence for balance that’s based on Rogue’s American Amber Ale. And, of course, alcohol. But the chipotles make a definite, upfront impact in both smell and taste. If you’ve ever tried the reddish-brown Tobasco sauce, that’s the flavor I’m talking about here. It’s first and foremost smoky, then peppery, lightly sweet, and it finishes with a definite spiciness (although not enough to cause the standard tongue any discomfort). Yes, spicy beer! The carbonation even adds a little bit more to the bite at the end, while keeping it crisp and refreshing. Just like it sounds, this is a unique beer with a one-of-a-kind flavor. And after my two year hiatus, it’s still never tasted better.

If you have yet to try a beer flavored with chili peppers, I suggest starting with this singular concoction. Another tasty brew from John Maier and Rogue. ‘Ole!