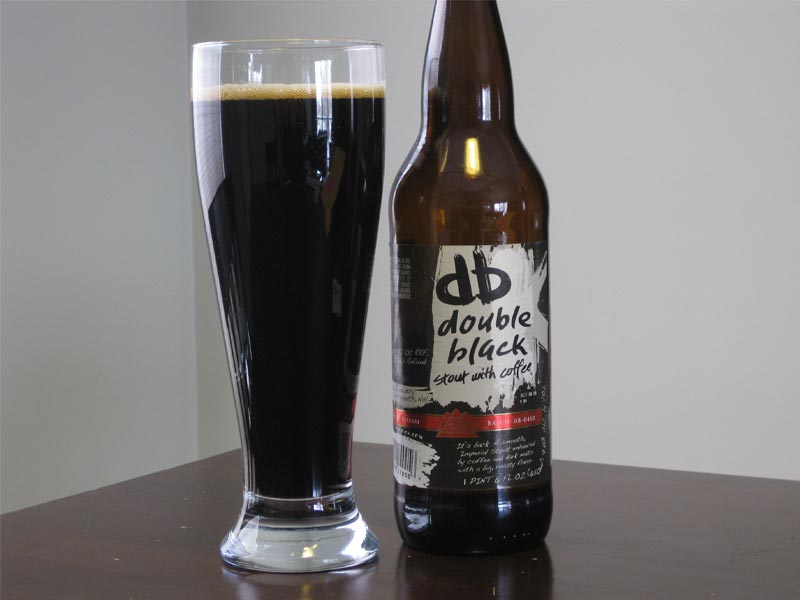 Today, instead of a piping hot cup of coffee, I decided to get a little adventurous and try Redhook Brewery’s ominous Limited Release Double Black Stout: 650ml of pure black attack. Comes in a tall brown bottle with a mediocre-ly designed label on it. Average labels aside, I’ve been drinking lighter beers this week so it was time for a pendulum swing … all the way to the other side.

I’ll confess I was pretty giddy just looking at this thing on the way home. Once there, I immediately commenced the partakeage. The pour of this bad boy revealed some great cascading, fitting for a full bodied beer. The look, I’m not kidding, is pure black. Only the head tells you it’s really dark brown when it’s sitting in the glass. And there wasn’t much of a head at all … just a half-inch or so, which faded within a minute. As for smell, if you’ve ever been near a coffee house, you’d be familiar.

The TASTE, however, is what it’s all about. I must say, this beer totally took me by surprise: I love it. I enjoy black coffee, and I enjoy beer, and from where I’m standing this beer combines those two like they were born from the same mother. Mouthfeel is good … not too bubbly, and packs such a rich, roasted taste that you almost do a double take setting down the glass. Could sworn you were drinking coffee just then. Seriously. You’re left with a thinly-sweet coffee aftertaste. There’s just enough hops to remind you that it is, after all, a beer. And at 7.0% ABV, it’s a great medium between the light and dark. As time carries on and some of the carbonation wears off, this stout just gets better and better. The last 1/2 was absolutely phenomenal.

Next time you’re at the office, you could easily get away with drinking Redhook’s Double Black Stout out of a coffee mug. No one would be the wiser. Looks like coffee, smells like coffee, but don’t drink it hot. Trust me, that would be terrible.

I found Redhook Ale Brewery’s motto to be on point: “Redhook refreshes the thirsty, rewards the brave, enlightens the ignorant and strives to stamp out jerkdom.” Well, this one’s for you, jerks.