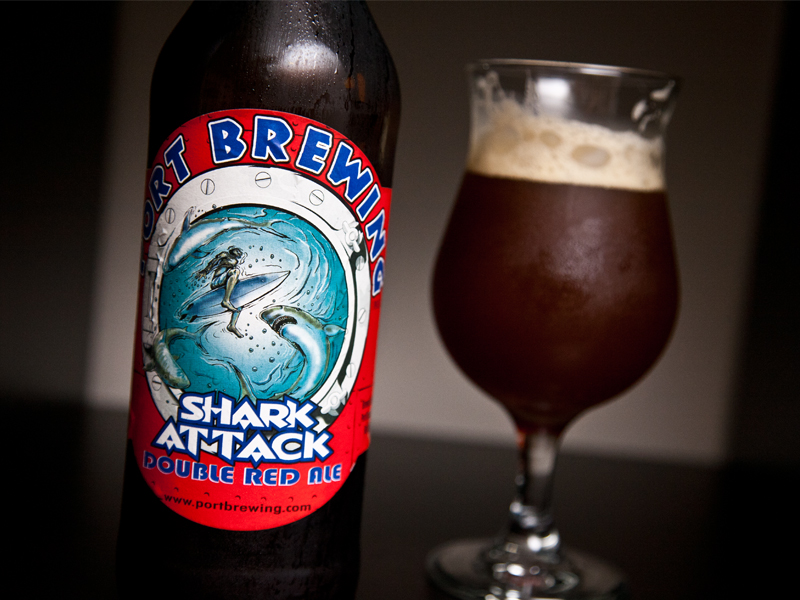 Port Brewing Company is located in San Marcos, California, and is also known by its other name, The Lost Abbey. You may have had beers from both names and thought they were different … but they’re the same. Ever since I tasted Grand Teton Brewing Company’s amazing Pursuit of Hoppiness, I have been interested in this “Imperial Red Ale” style. It’s a quasi-fad going around here in the states, and I was excited to try Port’s version, since their (hoppy) beers are held in high regard by our team. Surely Port’s Shark Attack Double Red Ale will be another winner!

I poured my bomber into a tulip glass, knowing it would open up the nose well. I was not wrong: Shark Attack came out a deep brown/red color, much darker than I expected. This is going to be malty! The head developed nicely, and I could easily smell many different notes in the nose: deep, rich malt and citrus/pine. It smelled … thick. High ABV, highly sweet.

Your palate will be Shark Attacked when you drink this beer. It’s big and bold, which is something that Port does well: super heavy with the malts, which give some toasty caramel and even chocolate flavors to the beer. The beer is no thirst quencher: its high ABV and sweetness make it viscous and chewy. Sure, there are hops. Plenty of Centennial and Cascade, which add a tangy, bitter twinge to the middle and finish of the sip. They linger on the roof of your mouth, while the malts settle everywhere else, and the alcohol provides that familiar warmth as you exhale.

As a big double/imperial beer, Shark Attack comes through. Although I cannot say that I love it personally: it was too heavily malted to really stay a favorite. I think the bold malts and bold hops sort of cancel each other out in some ways, and you’re left with 750mL of heaviness that is super hard to finish. As far as hoppy red ales go, I think lower ABVs and a little more hops make for a real winner.