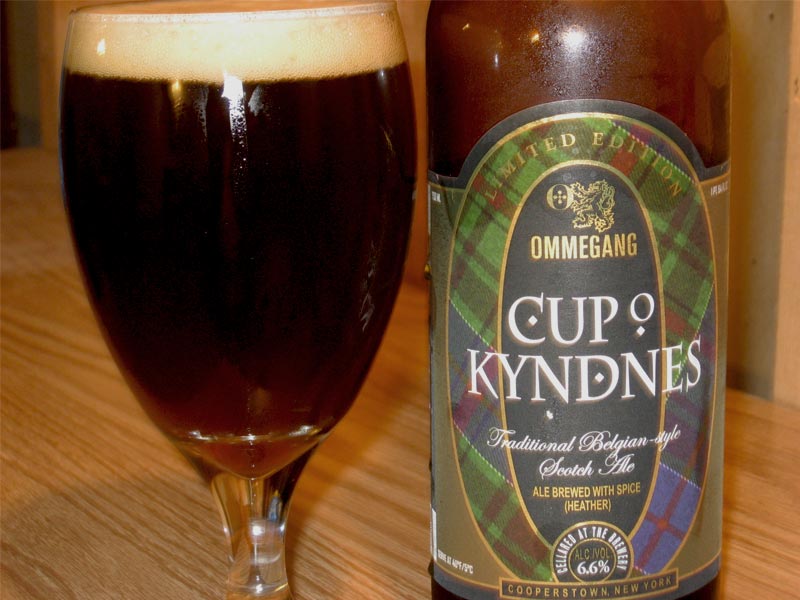 Spotting another limited edition Ommegang brew on my way to the checkout line caused quite a problem as I had two bottles under each arm and both hands full (tip: use a cart of baskets).

Having Scottish roots and a curiosity for Belgian beers I opened up this plaid laden bottle. Pouring a reddish/brown hue, but deep ruby red when held up to the light, this brew looks like a classic Scottish ale (minus the fizzy head and continuous bubbles that formed circles at the top). The history behind this style making its way into Belgium dates back to WWI when Scotsmen fought in that region. Local brewers wanted to appeal to their visitors and started brewing their Belgian clones. I’m glad I read the bottle as I learned something new today.

Using Munich, Pilsner, Caramel and a touch of smoked malts this brew is blatantly malt-centric. To add a touch of Scottish style Heather tips were added. The overall smell of this brew is rather interesting. At first it I get aromas of deep toasty malts, a mild hint of peat, but the overpowering smell is the floral notes given off by the heather and yeast. Both support each other well rending what I thought was something close to grape soda or old lady potpourri.

At only 6.6% abv this is an easy drinker with not much bitterness. The heather adds a nice earthy spice to the palate that finishes on the floral side. I’ve had darker Belgian beers before, but they are usually higher in abv and are generally sweeter in flavor. This beer however, was dark and malty, but the yeast didn’t seem to jive well. The heather did play a vital roll in offering some bitterness at the finish.

I picked up minor metallic flavors along the way and it seemed to me like the spicier yeast qualities were stifled by the heavier malts resulting in some conflicting off-flavors. While I enjoyed the Scottish ale aspect of the beer, the Belgian counterpart did not blend/support entirely. I strongly feel that hoppier beers are much more suited for the mixture of styles.

This is a good beer in and of its own right that had some redeeming qualities, but on the whole there seemed to be too many parts of the beer competing with each other rather.