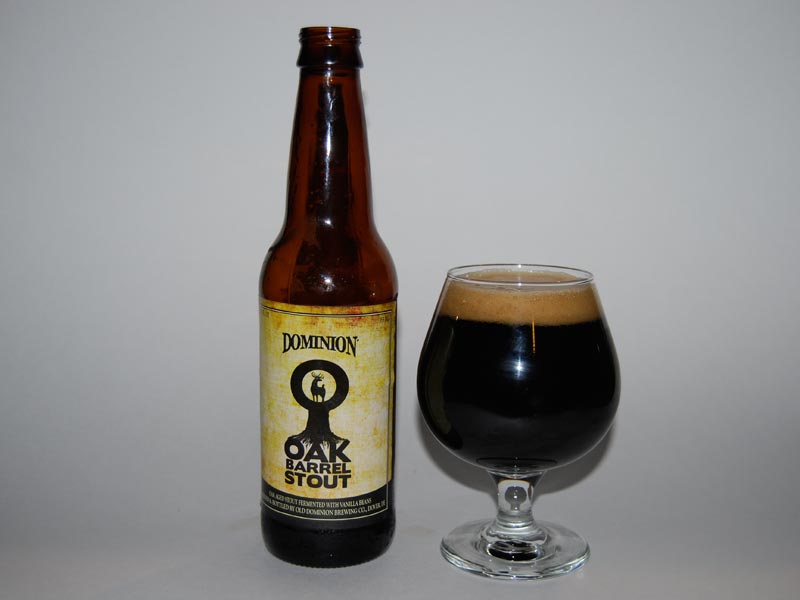 Michael: Life has a way of surprising you. So does beer. This was a gift and so for some reason the price tag of ‘free’ had prejudice me against this brew. The label was average, nothing exciting and I had never bumped into Old Dominion before. So, thinking I was in for an average beer on average evening, I cracked it open. Nothing incredible there, definitely a typical stout blackness and a simple, brown head. I had some chores to do, a bit of clean up before my wife got home, so the glass sat on my counter for a while, breathing and warming and getting ready to surprise me.

It was on the nose that I started to realize what I was getting into. It smelled solid, malty, sweet and caramely. Once in my mouth, the surprise was full-on. Smooth enough to make you want to swirl it about, but carbonated enough to motivate you to swallow, it was unbelievably balanced. The lingering finish was earthy, reminiscent of the oak chips they claimed to use in the brewing process. It left my mouth dry, searching for that next sip of creamy goodness.

One thing by which I was slightly let down, was that the bottle bragged of the use of vanilla beans used during the dry hopping. I typically love these added flavors in my beer so was a bit disappointed when I couldn’t find hints of vanilla. Nevertheless, had I not seen the claims, I wouldn’t have noticed anything lacking. Grade: A-

Tom: This sampled this stout around the same time Michael posted his review and more recently when I found a bottle in the back of my fridge.  It is 3/28/11 and my bottle was capped on 6/8/10.  I would make this argument that this beer should be enjoyed quickly and not aged (rightfully so as it has a low abv).  The initial sampling yielded some great flavors as I noticed a great fresh vanilla dimension and the oak aging softly rounded out the edges.  On the sweeter side of the stout spectrum it offered some deep roasted grain that seem to blend with a dark prune aroma and flavor.  Oak chips add some tannins to the brew that impart a dryness to the finish.  It was almost like enjoying a sweet stout turned dry irish stout in the span of one sip.

However, this current glass I’m drinking is much more woody and musty.  I brewed a Porter a year ago and aged it on oak chips.  What started as an experiment ended up being a porter that tasted more like tree bark.  Noel, graciously dubbed it “tree beer.”  Well, that is how this old bottle is coming across…like a tree.  Then vanilla is faint (come across as more as licorice) while the oak flavors seem amateur.  It still retained the grain and dark fruit components, but lacked the depth it was shooting for.  If you can get your hands on this beers drink it fresh.  You’ll be in for a surprise (as Michael stated). Initial Grade: B+. Revisit Grade: C-