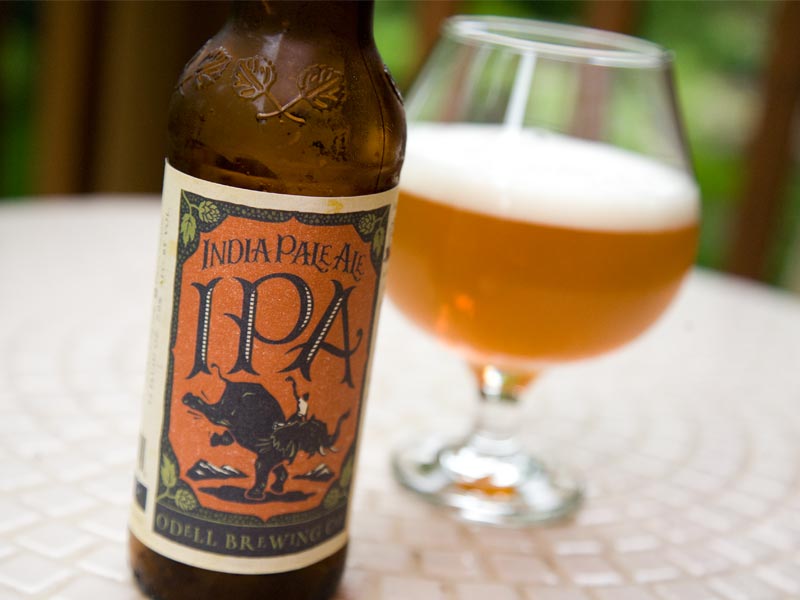 Taylor: Odell Brewing Company in Fort Collins, CO is another great craft brewery that doesn’t distribute in the Chicagoland area. So … I brought some back with me from Missouri, where they do distribute. First up to bat is their American IPA, “ready to buck convention.”

First off let me say that I really, really … really enjoy the label designs. Props on these sweet illustrations go to artist Mona Caron out of San Francisco. Nice work Mona!

I wanted to start with the IPA to get a feel for what counted as “hoppy” by Odell standards. The other two brews I have of theirs are the 5 Barrel Pale Ale and the 90 Schilling Ale, so you understand why I’m specifically thinking about their hops usage.

This beer poured orange-brown into my snifter. I tried to maximize the head during the pour but ended up with less than a finger’s worth of small, uniform off-white bubbles. Going in for the nose, I was a little surprised by the more subtle aromas: while easily detectable, the nose was not nearly as strong as most IPAs I have had. It boasted some pleasing citrus and pine, along with a honey-like sweetness. Makes me wonder if, despite adding “new varieties of highly aromatic American hops,” they didn’t pay enough attention to the dry hop. Who’s to know…

The taste. Enjoyable. A little orangey, a little piney. Sweet like honey. Well carbonated, very good cold. I found it less tasty when it warmed, which I usually don’t mind in other IPAs. This was a refreshing beer, though I think it toes the line between IPA and PA. For a beer that has won the…

…I thought it was just okay. Worthy of a bronze medal perhaps, maybe. I say it’s just okay not because it has any kind of poor quality or taste, but because I’m not sure it really fits the style well. The “distinctive bitterness profile” and “incredible hop character” just weren’t there for me. Those were not the right adjectives.

Now that I have a better handle on what “hoppyness” is at Odell, I’m hoping the other two brews in my fridge can pick up some of the slack in their respective styles.

John: This beer is a winner. Literally. In the last 4 years 3 silver metals and 2 golds! So when I picked this up I was ready to win. I wasn’t disappointed. Odell boasts they took a traditional IPA and souped it up “American Style”. This “winner” pours an amber/orange color that is a bit cloudy but not yeasty looking. The 3 finger head is strong from the beginning and lasts with lacy texture for several minutes as you get ready to dive in. The head clings to the side of the glass down to the last drop. Odell definitely brought the hops into the aroma. About as close as you can get to a gold metal. Pine, citrus in general, grapefruit specifically dominates even before you take a sip. Smell it a while and you’ll pick up the grains and caramels in the background but it is definitely a “hopfeast” for the nose. The taste? A great beer. Consistent with the smell this leads with the hops and leaves with the malts. Candy comes to mind the more I drink it. Candy that leans toward caramels. Swish it around in the mouth a bit and you’ll get a nice blend of hops, malts and bitterness. I love the mouthfeel. Medium to buttery so it’s going to stay with you for awhile. The finish is lasting bitters as a good IPA should be in my opinion. I can see why the metals were poured out on this brew. Glad Odell made it to Minnesota. It’s a winner.