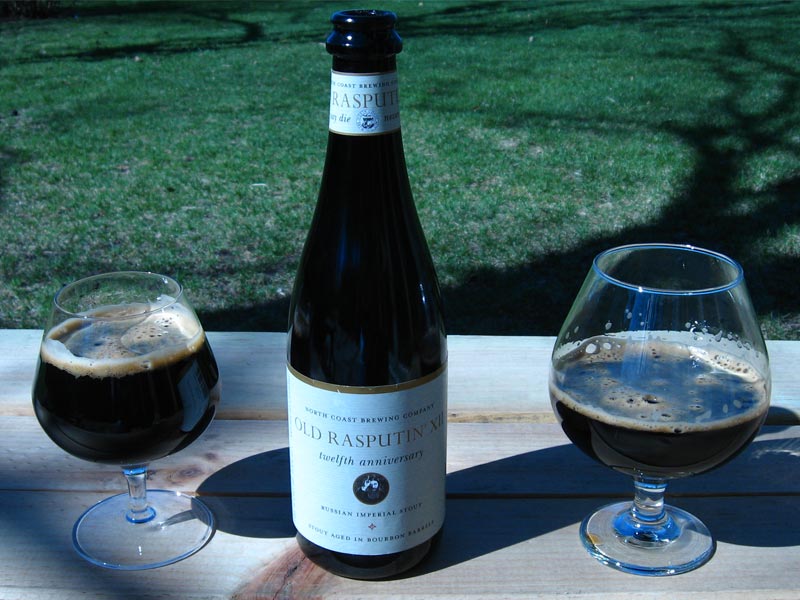 Noel: Every now and then, on the journey to sample a wider and more comprehensive range of beers, you run into one that somewhat revolutionizes what you had thought possible. Now, I have to be honest and say that up until a few days ago, I had never had a beer aged in bourbon barrels (bourbon or scotch or oak or some other type of barrel aging seems to be a craze that nearly every craft brewery is now dabbling in). So I’m not by any means going to come out and say Old Rasputin XII is the best “aged” beer ever. Chances are it’s probably not. But wow…it did some serious broadening of my horizons.

My guess is bourbon barrel aging doesn’t work too well with lighter bodied, hoppier beers. But with a beer as dark, smooth, and full bodied as Old Rasputin, the results are nothing short of amazing. Pour it out, and alongside all the great roasted coffee tones of the original are vanilla, oak, perhaps even a little raisin, and a stronger alcohol presence. It literally smells like you just poured bourbon and espresso into one glass. To be honest, I don’t even like bourbon…but this was unreal. And the taste was more of the same: the bourbon was upfront…smooth, oaky, and sweet, and then faded back into Old Rasputin’s classic roasty bitterness. The alcohol comes in at the end and burns the back of your throat a bit, but not unpleasantly so, and you’re left with a nice vanilla coffee aftertaste. It’s ever so slightly smoother, sweeter, and heavier than the original. All in all, I was most amazed at how completely it had taken on the distinctive nuances of a bourbon, yet still maintained its own unique character as an imperial stout. The best of both worlds, in my opinion. For all the bourbon-aged beers yet to be tasted…the bar has been set. Grade: A

Tom: I had this beer shortly after its release last year and fell in love. I enjoyed it with a robust cigar which only helped to enhance the malt flavors. The aroma is of straight up Bourbon and hard liquor. Both the Imperial Stout and Bourbon aspects do well to mellow each other out. Charred wood, vanilla, heavy roasted grains, dates and fresh cut timber were some notes that I picked up on. There is a pleasant tingle on the back of the tongue and throat as you finish your sip. This is proceeded by a very hardy and rich dark chocolate, coffee, Bourbon, smoky wood body. The mouthfeel is thick and coats the palate. If you like the regular Rasputin this beer will take your love to a whole new level. Noel and I enjoyed this while brewing a batch of beer one Saturday afternoon. I’m grateful for his friendship, sharing a bottle, helping me brew and letting me partake in this review. Cheers mate! Grade: A-

Michael: This is an unofficial review. This is my all-time favorite beer and second ever A+. It is heavy without being overbearing. It is flavorful without being crazy. It is most definitely a sipper, but balanced and hides the 11% alcohol beautifully. Find it. Drink it. Love it. Grade: A+