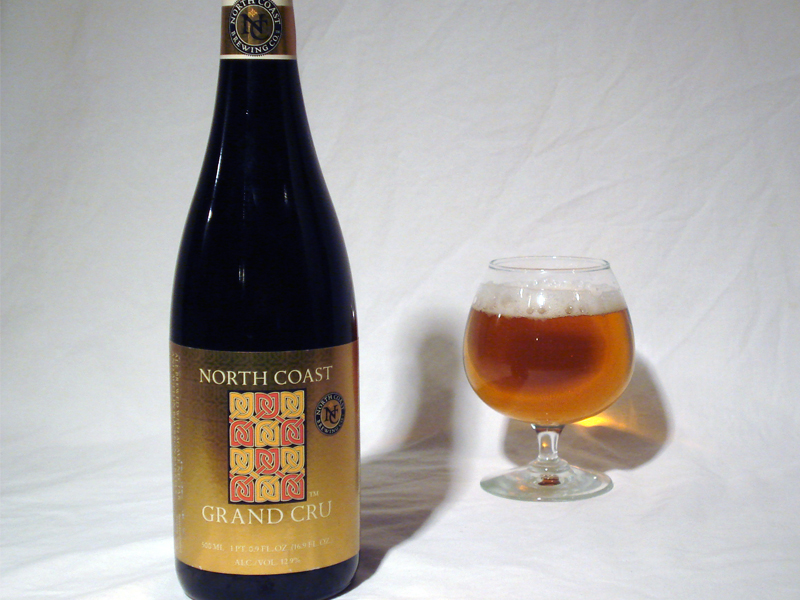 A Grand Cru to end all.  This beer is huge across the board.  The ABV is pushing 13%, Agave Nectar is incorporated into the brew, and it is aged in Bourbon barrels to maturation.  Or should I say perfection?  I sincerely thought I was in for a dark maroon colored ale that tasted more like a deep Porter than anything.  However, I was completely wrong.

Using an all Pils malt base and then the addition of Agave nectar, this beer looked more like a Tripel or a darker Tequila (which used Agave as the key ingredient).  Golden in hue with some great caramel Bourbon tones this beer has some crazy carbonation.  The head fizzes to the top and lasts for a few minutes then fades into a film that is supported by consistent bubbles.

The aroma is a very interesting combination of multiple beer styles.  It possesses the bready, hoppy, yeasty qualities of a Tripel, the abv heat and muscle of a Belgian Strong Ale, the spice of a Pumpkin Ale, and some sourness of a Lambic.  I should not forget to mention that it carries some very appealing liquor notes found in Bourbon and Tequila.  Light, yet rich caramel notes are very noticeable and the addition of Agave nectar is surprisingly apparent as well.  With the higher abv I really got a good aroma of what one might smell in Tequila if the alcohol content was not so high and overbearing.  Sugary and fruity.  There were hints of tart juicy apples, pears, taffy apples, cinnamon, nutmeg, grassy hops, earthy oak notes, and a caramel nose like I have never experienced before.  The Bourbon barrel aging as so well done.  In fact, this smelled close to Woodchuck’s barrel aged cider.

Wrap up all the aromas into the flavor and then stop…enjoy…savor.  While the might seem daunting, it is only as noticeable as the abv of a Tripel.  At first your palate will pick up the abv heat, Agave sweetness, and caramel Bourbon notes and convince you it was Tequila.  Then after a few sips, your palate will start to hone in on the rich Bourbon notes followed by a tart apple, lime, lemon finish which give the impression of a Champagne (with the help of the lively carbonation).  The taste is a mix of Bourbon, Belgian beer, Tequila and Cider with a mouthfeel of Champagne.  It is surprisingly light and crisp making it easy and fun to drink.  It has some great wine notes similar to that of a Sauvignon Blanc, Pinot Gris, or Riesling.  In fact, it was close to the DFH Midas Touch which uses a grape concentrate in the brew.

It was an complex and interesting beer to partake of.  A well-crafted beer that deserved high marks in my book.