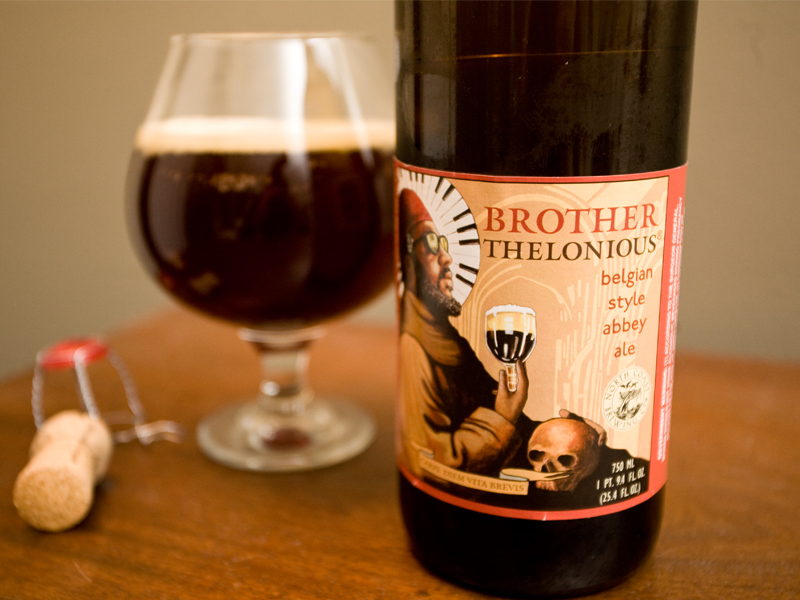 If I’m completely honest, I would say that Belgian-style ales don’t really get me that excited. Whether they be genuine Trappist ales from Chimay or Rochefort, or simply “Belgian-style” homages like the North Coast one I’m reviewing … I simply haven’t developed my palate for them yet. That’s not to say that I don’t respect them and what they signify in the beer world. And it isn’t to say that I haven’t enjoyed them before … because I really enjoyed Rochefort 10.

In the spotlight tonight is North Coast’s Brother Thelonious Belgian-style Abbey Ale, brewed in the Belgian Strong Dark Ale tradition, with an American twist. These are traditionally higher in ABV than Belgian Dark Ales, often a little on the dark fruity side (think prunes and raisins), and of course easy on hops. In times past I’ve not been fully down with how thick and sweet and boozy they can be … at this stage in my palate’s development I’m still focused on beers with lower ABV and brilliant, bursting hop and/or malt aromas.

So … why Brother Thelonious? And why now? Well, I love jazz, and this bottle jumped out at me. I was looking for something new. So that’s the why in a nutshell. North Coast donates a portion of their Brother Thelonious sales to the Thelonious Monk Institute of Jazz, and I’m way cool with that. I love it when craft beer extends itself philanthropically. Also … you can’t argue with a beer that bears one of the coolest names ever invented.

On to the beer itself. Let’s start with the bottle. I love the shape of North Coast’s bombers. Of all the varied shapes I’ve seen of 750mL bottles, this one is the best. It reminds me of the old, sea-washed rum bottles you’d imagine in the hand of a wily swashbuckler. It’s corked, not capped … which I would prefer every time if I could. This evening I have no friends to share this beer with … and that’s fine by me. It’s freezing outside, and I’m cozy indoors with my family, and a couple of hours to hang with Brother T.

Appearance: Sadly I do not own a goblet (yet), which is the preferred glassware for most Belgian beers, as it allows one to fully experience the unique Belgian aroma. I instead poured mine into a snifter, which is a satisfactory trade-off in my opinion. Brother Thelonious did not develop much of a head, which I have heard is true about this beer. I’ll concur with North Coast on color … the ale is a deep, dark mahogany, and clear … no yeast floating around that I can see.

Aroma: Knowing Brother Thelonious weighs in at 9.4% ABV, I was expecting a big boozy, fruity kick in the nose, but I did not get it. Which isn’t necessarily bad in my opinion. I thought the ABVs were fairly obscure in the nose, though it definitely smelled sweet like dark fruit and caramel. At this point I’m starting to wonder about what it’ll taste like, and hoping that it won’t be as heavy as I first thought.

Taste: Turns out I am right about the taste. Here is a Belgian-style Ale that I can cut my teeth on (so to speak). At first it bursts with a toasted caramel-like flavor, which quickly fades as the sweet, fruity character emerges through the finish. I am pleasantly surprised … while the ale is dark, sweet, yeasty, and definitely tastes Belgian, it is not in my opinion super heavy. It hides the ABVs, making it seem lighter and more drinkable, which I really like.

Mouthfeel: Again, there was not much head, which I witnessed at the pour, and led me to believe it would not be highly carbonated. Correct again … the mouthfeel is not crisp, but definitely not flat. It has a subtle bite to it that you don’t really think much about. The ale coats the inside of my mouth and leaves a little bit of lingering taste after the swallow. As the beer comes up in temperature, its warming effect is more noticeable. So, it tastes a little more boozy as it warms.

Drinkability: A more drinkable Belgian-style Abbey Ale than you might assume, though I definitely felt the buzz after finishing the bomber in 45 minutes. It helped me get a great night of sleep. I have come to the conclusion that Belgian ales are perfect during winter months, and I fully plan on diving into these styles more in the next few months.

Judging based on my enjoyment of the beer, I’d probably give Brother Thelonious an A-, but I feel that from what I know about Belgian Strong Dark Ale as a style, it seems to me that Brother T is probably more like a solid B: all the right pieces are there, but it’s significantly weaker than its peers. And I did not notice North Coast saying anything about purposely trying to produce a more drinkable Belgian-style ale so it makes me think they could still make this recipe better-suited for the style.