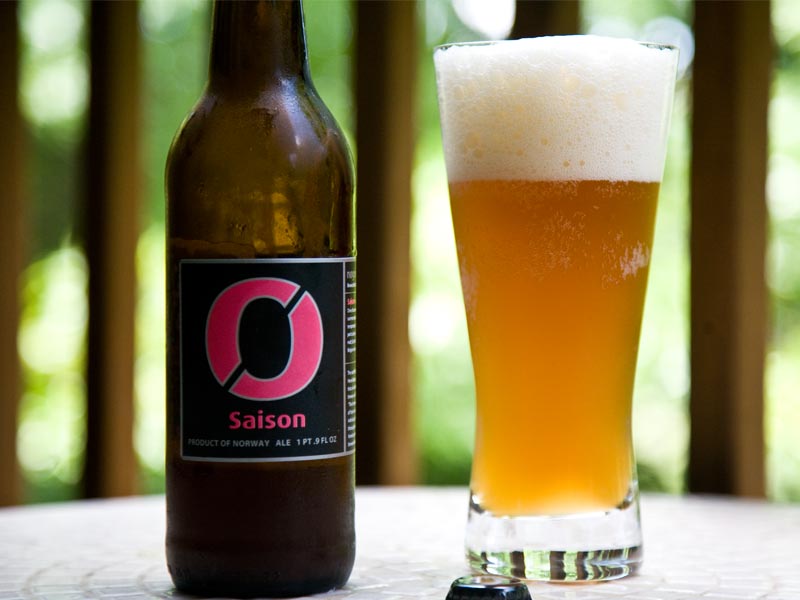 I finally made it to reviewing a beer from Nøgne Ø, Norway’s most recognizable brewery this side of the Atlantic. To start out, I’d like to make sure we all know how to pronounce the name. “Nøgne Ø” is pronounced “nirg nir,” with the “ir” like in the word “bird”, though it is not a hard “r”, it’s soft. Glad we got that taken care of.

The beer I tried is their Saison. Comes in a bomber with their simple black label, featuring a grande “Ø” and the name of the beer in a specific hue: for this summer beer they chose pink. Alrighty then.

One of the beer guys at my local Binny’s saw me looking at Double IPAs and thought that would be the perfect time to suggest I try a Norwegian Saison … if you can figure out the logic there, be sure to let me know because I am still scratching my head. But it was on sale for 7 bucks so I obliged the dude and finally sat down to drink it on a hot, muggy afternoon. Nøgne Ø’s Saison is toted as “one of [their] most refreshing brews, made for those hot summer days, but satisfying all year round.”

“Saison” means “season” in French, and this style of beer takes its name (it also goes by “Farmhouse Ale”) from the farmhouse brewers of Wallonia, the French-speaking region of Belgium. From what I’ve gathered, the style’s origins are quite broad, as each farmer would make his own version of the beer, the general denominator being that it was low in ABV and “refreshing.”

Immediately from the pour, it is apparent that Nøgne Ø’s Saison is made with wheat. It looks wheat, smells wheat (banana/clove, that is), and … tastes wheat. Has a nice, billowy biscuit-colored head and a cloudy yellow-amber hue. The nose is full of wheat malt sweetness, a little musty for me. Not much hop presence in the nose. Still, it does not pound my brain so I guess that this will not be as potently wheaty as, say, a Hefe, which I just do not enjoy. The ingredients are as follows:

I did not finish this beer, but could have. It was not too strong. Tasted mildly citrusy, very sweet. Had a wet, musty lingering to it. It was also kind of grassy. I have heard that this beer is very true to style, but to that I say, “there is no definite Saison style”. This particular version didn’t overwhelm me. I will not be drinking it again … just not a fan of this kind of “refreshment”.