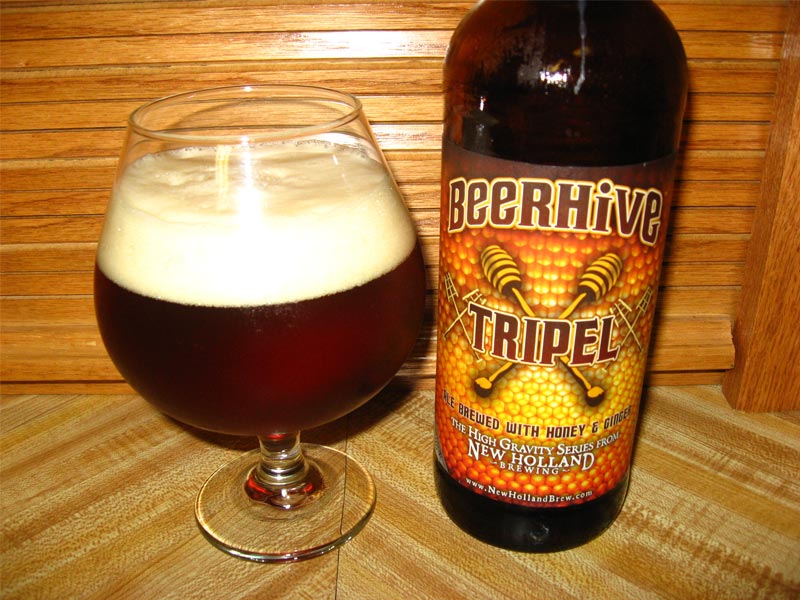 After a productive evening being a worker bee around the house I decided it was time to unwind and enjoy the cool breeze, my hammock, and a beer. Searching the newly arrive shelf I located a new release by New Holland that fell in their high gravity series. The label depicted a large honeycomb with was enough to warrant the purchase. I’ve always enjoyed when brewers use honey in beers so my curiosity was peaked. At home I noticed that they also added a touch of ginger in hopes of “providing a refreshing finish” so states the label. The honey used was wildflower which is darker in appearance than say orange blossom. Combined with the malts this brew is deep ruby red with a very large, fluffy creamy head. I’ll admit my first sip resulted in a foam covered nose and mustache, but hey…you have to have fun with your beer, right? One observation I though interesting was that it is relatively clear, not hazy like its Belgian counterparts.

If you like Tripels and you enjoy rather complex beer, or if you just want to expand your palate I would recommend giving this beer a try. It had all the classic qualities of a tripel, but the honey and ginger heightened the whole experience. Very well done!

The aroma was fruity, but in that deep rich way common to Tripels. A spiciness hovered in the snifter as the yeast and ginger packed a 1-2 punch that awoke my senses. There was a small alcoholic presence that only helped to bring out the spices. I’m not sure if they used Belgian candi sugar since honey was added, but it smells thicker and more floral than other tripels I’ve had. Fruity notes of grapes, plums, prunes, and dates are noticeable.

If my homebrewing knowledge proves me right candi sugar adds something for the yeast to feed on without added a full, heavy sugary body. If that is the case then this beer differs as it is thicker and somewhat sticky. The honey does give off a more “natural” floral sweetness, but true to the label it is not cloying since the ginger helps to rinse away the majority of sugars. Very yeasty and the malts are layered and smooth. There might have been a little bit of earthy hops in the finish, but it’s hard to draw out over the ginger (which almost acts as the bittering agent). While some sugars remain, the palate is overtaken with a drying effect in the aftertaste. At 8.74% abv I might by another bottle and let it age for a year to see how the flavors develop.