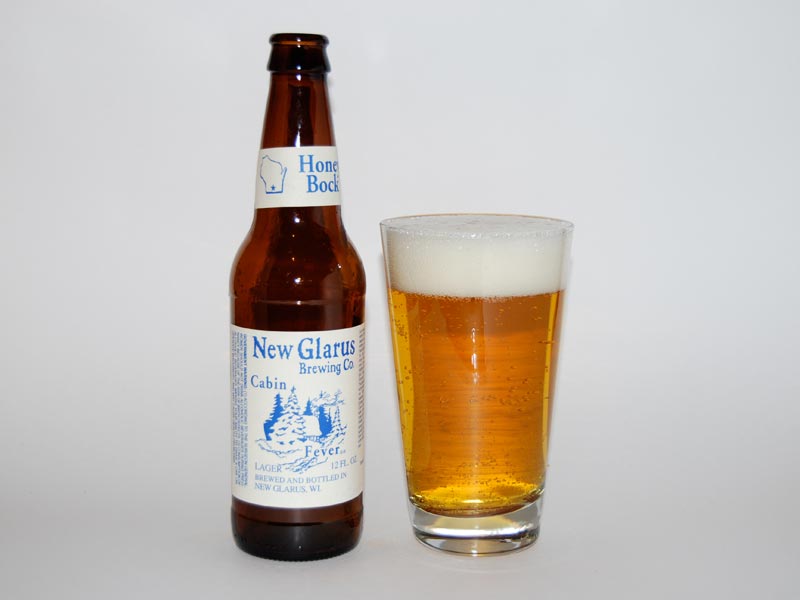 Cabin Fever Honey Bock is a pale bock beer brewed seasonally by New Glarus Brewing Company in Wisconsin, USA. Style-wise, it’s toted as a “Pale Wisconsin Honey Bock” and according to New Glarus, is “brewed with an exclusive blend of Wisconsin two row barley that balances seamlessly with our special European hops. Naturally sweet Clover Honey was added in the kettle accenting warm flavor notes on your tongue.” ABV is 5.5%. The following is our team review of this beer:

Tom: Any cabin fever that I might have had dissipated with one sip of this glorious brew. I tip my hat to New Glarus for producing a quality bock. I enjoyed the pale malt complexity and smoothness this lager possessed. Smelled crisp and clean like a Maibock. The nose had floral notes of hops and honey. My taste buds were excited by the malt and honey sweetness throughout. Mead-like qualities and the hay/straw finish caught me pining for Summer. With more body and minor caramel flavors, I’d say this is an amped-up version of Leinengukel’s Honey Weiss. A must try! Grade: A-

Michael: Do I have cabin fever? It’s 33 degrees outside and I’m grilling chicken in my t-shirt. I guess I do. The brew pours a typical straw golden with a frothy head that disappears like Chicago snow drifts in March. It smells simple, yeasts and a nondescript sweetness. Tastes good for a basic lager, but no real surprises or subtleties that make it intriguing. It is refreshing and goes down easy, a nice pair to a burger or brat on a hot summer day. Unfortunately, it seemed typical, no frills and worsened as it warmed. Grade: C

Matt: Pours a crisp, clear, pilsner-esque yellow with big frothy white head. Smells sweet, corny, with a hint of straw or grass. Does resemble of faint aroma of your typical European lager which intrigues me (probably the use of European hops). The taste reminds me of Leine’s Honey Weiss: light, not too much flavor, but more character than a light American beer. There’s a faint sweetness, which coupled with a slightly bigger mouthfeel than your typical light beer, gives this beer a good balance of taste and drinkability. The carbonation suits this beer well. Grade: B

Noel: Another Maibock, and I’m starting to get the feel for this style. Cabin Fever has maybe a tinge of honey in the taste (it’s labeled “Honey Bock”), but it’s mostly just the toasty, biscuity malt that you should always expect. Maibocks seem to be a perfect go-to for the hop-averse, and this one is no different. No hop bitterness to speak of, and whatever hops there are don’t quite balance out all the sweetness of the malt. Finishes with a touch of alcohol. A safe and solid option for those looking to expand their horizons; nothing too extreme here. Grade: B

Taylor: This is the only New Glarus beer I’ve had outside their Spotted Cow, and I must say that I enjoyed it immensely. While I’m not currently on a kick, I really love what I’ll call the “warmth” of a good maibock – it is definitely a break from the IPAs I’ve been exploring. Pours a golden copper, barely any head at all. Smells toasty and subtly sweet, reminds me of the warmth of a fireplace or oven. The taste is great, seems to have a baked quality to it, but it’s not bready. I couldn’t really sense any hop bitterness. To me, this one is all in the finish: crisp after the carbonation, toasty and faintly sweet. So good on a cold night. Grade: B+

Cyrus: This is a decent winter seasonal with a heavy finish. The beer poured caramel/golden with little head, and slight carbonation. I have always found myself to be a bigger fan of New Glarus brewery than the beers themselves. Always cool to hear of a husband and wife starting their own brewery, and having great success. Dan Carey, brewmaster and co-founder, was once employed by Anhueser-Busch (hence, Spotted Cow). Regarding the beer, I caught wheat, floral hops, honey, malts, grains and (especially) barley. I don’t know what it is, but the “sweetness” of this beer throws my taste buds off, perhaps its fruits or clove/honey aftertaste. Cabin Fever is typical of a Midwest shot at brewing a bock style ale. Personally, I think that New Glarus should stick to what they do best, lagers. Grade: C+