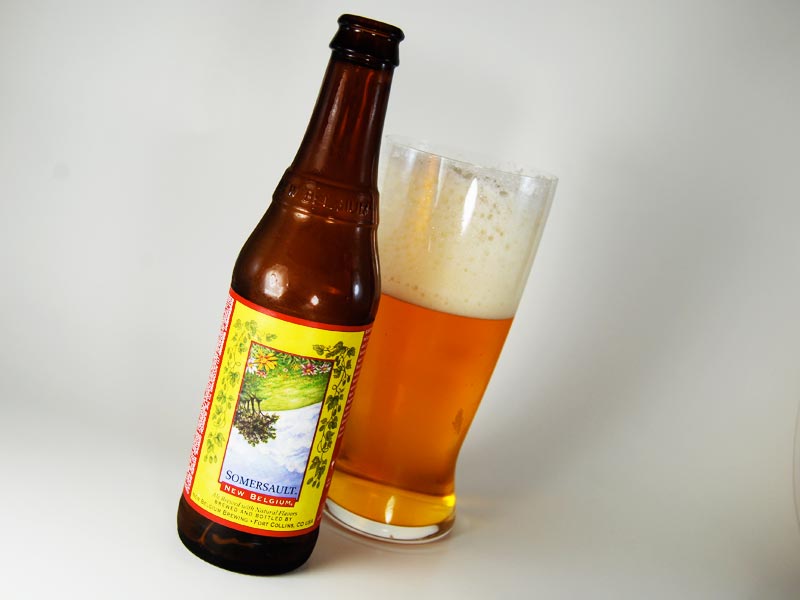 It’s lunch time on a Saturday and it’s 90 degrees. I passed by my Samichlaus and my Aphrodite and went straight to this refresher from New Belgium.

I poured it straight down the center of my lager glass. It foamed and fussed for several minutes before it settled enough to let me pour in the remainder. The head was like swiss cheese, airy enough to see through the holes to the other side of my glass. It formed little hills of foam that crowned a darker-than-straw golden, with just hints of a hazy, faint amber. It was clear and looked crisp and ready to be drunk. So I obliged.

There was a hint of sour fruitiness on the nose, reminiscent of Magic Hat’s apricoty #9. There was a decent maltiness too, that prepared me for a bit more of a meaty brew, but one that was still sure to quench even on a hot, humid day in July.

The initial sip was a bit uneventful. It was thicker and more bodied than I had anticipated, but initially I couldn’t taste much else, completely missing the apricot of the initial nose. With a couple more deep swigs, however, I got a more nuanced sip. There was citrus and malt and yeast for sure, with a slight spice, enough to lighten the thicker body and finish it dry and light. To me, this is a food paired beer for sure, not as showcased as a standalone as much as a perfectly partnered to a decent meal. There were definite crisp biscuit flavors as well, enough to give some complexity and, again, body, to the citrus and spice.