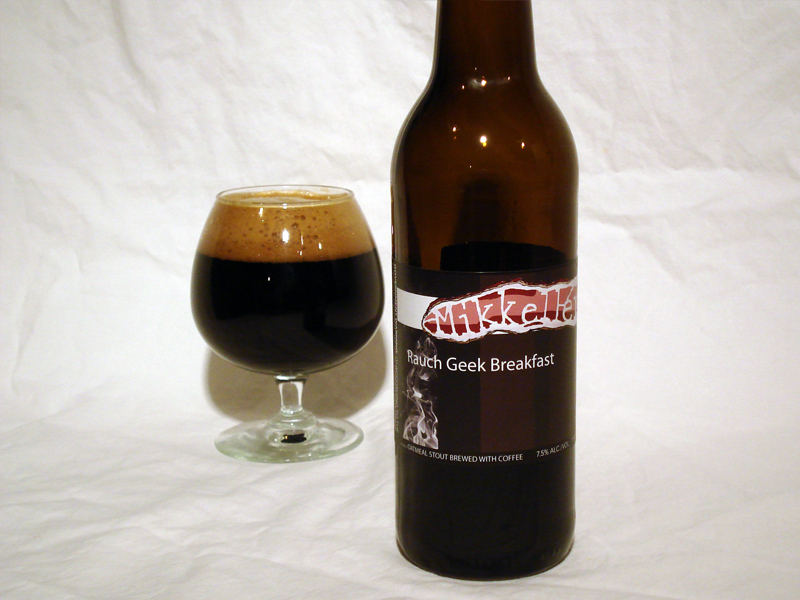 Am I in Bamberg, Germany?  This beer smelled like the beech wood smoked classics from Aecht Schlenkerla.  The smokey aroma rose from the bottle and glass with ease.  Interestingly, the woody notes brought this variation close to that of a Bourbon barrel aged beer.  However, it lacked the alcohol sting and carried a lighter wood aroma than an oak barrel.  It sure adds an interesting twist to the brew.  The smoke quality did stand out, but at the same time it blended well the coffee and burnt grains to really create a breakfast-like aroma (bacon included).  Hints of berries (raspberry and blueberry) were noticeable beneath the deep layers of astringent brunt malts and well roasted coffee.  In fact, this smelled like a camp site on a brisk morning.  The fire is smoldering giving off a mellow smokiness as you bring it to a roar while you brew a rudimentary cup of Joe.

The flavor in this sucker is literally as it smells.   Nothing to fool you.  Smokey notes up front and well into the aftertaste.  Coffee notes are stronger towards the finish making for a well-rounded brew.  Again the oats gave that nice velvety, oily mouthfeel which I think helped to tone down the smokey aspect.  This is a solid brew coming in at mid-strength alcohol content so the oats, coffee, and smoked malt stay on the palate a little longer than if it was an imperial beer.  I like the complexity this beer had and how each ingredient helped to highlight the other while also being strong enough to stand alone.  Out of Mikkeller’s breakfast stouts I’d say this is one of the more interesting variations  offered.

It should be noted that my bottle did home some chunks at the bottom so make sure you decant accordingly.