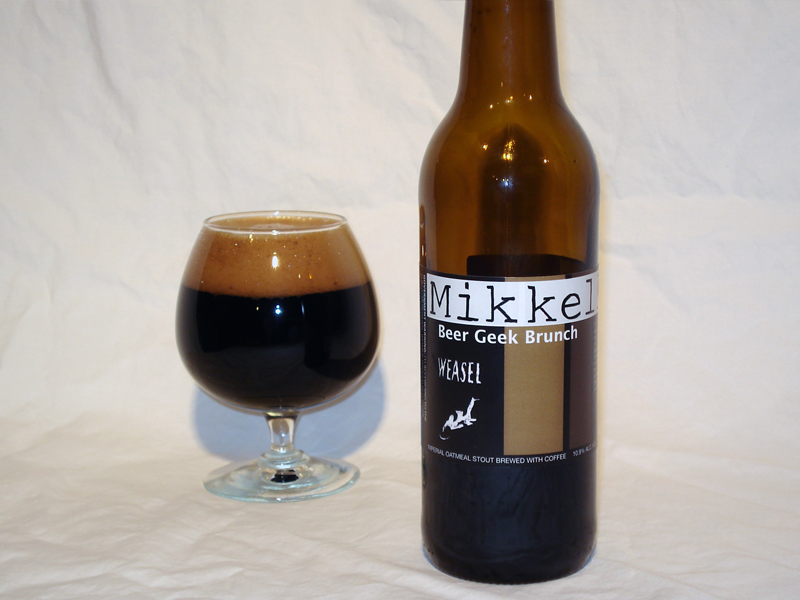 I will be dead honest…this is a weird beer.  When the cap is on and I read the label it seemed unique.  However, when I took my first sip I could not help but think, “I’m drinking shit!”  Allow me to elaborate.  Back when the Dutch controlled much of the trading in the East Indies, coffee was a commodity.  On the plantations locals were not permitted to pick coffee berries for personal enjoyment.  However, they [natives] quickly realized that a small rodent (Civet, Weasel, Luwak) would eat the choice berries, digest the fruit, and then pass the seeds.  These defecated seeds would then be washed, dried and roasted to create a unique coffee that become popular (not to mention limited and costly).  The enzymes in the weasel’s digestive track help to break down the coffee bean allowing for a smoother, less bitter bean and imparting unique flavor due to the acids that seep into the bean.  Big picture, some animal crapped out some coffee beans which were then used in the production of this beer…uh?!?!  Don’t worry it has been sterilized.

There are a few things different about this beer than the original Beer Geek B-fast.  The head was much darker.  Instead of a medium khaki color it was deep mocha similar to Founders Imperial Stout.  While I’m not sure if it was because of the coffee or bigger grain bill, I thought it fitting for an Imperial Stout.  The color of the beer itself was a super dark brown when pouring and pitch black when in the glass.  The carbonation is moderate producing a slight film after the head settled along with giving some balance to the oatmeal stout body.  Helped make the coffee come alive a little.

When I reflect on the flavor, it is hard for me to think of it as a singular brew.  To me, it embodies/incorporates a few stouts that I love.  It has the deep roasted/burnt malt quality of Founders Imperial Stout, the coffee notes of a BCS Coffee, the body of Peche Mortel, and smoothness/creaminess of The Poet.  Yet at the same time, it can stand on its own.  The mouthfeel was still slick and oily due to the nice addition of the oats.  I do think the higher abv did contribute a lot to this beer.  It helped to boast the intensity and body allowing for the burnt astringent grains and coffee to share the stage harmoniously.  Compared to Mikkeller’s base Breakfast Stout, this one offers more body, flavor and complexity of flavors.  Moreover, the way each component fits together is well done.  The finish is coffee, but combined with the grain bill and oats, it gives a wonderful chocolate finish and aftertaste (on the dry side).

The aroma is straight up coffee…it is smooth and somewhat fruity.  The grains are roasty, the hop level on the  moderate side providing some piney notes.  Overall, I’d say there was a difference in the coffee used.  It had a much deeper aroma, flavor and complimented the grain more.  To me, it seemed a lot more rich/full than bitter (like a Breakfast blend).