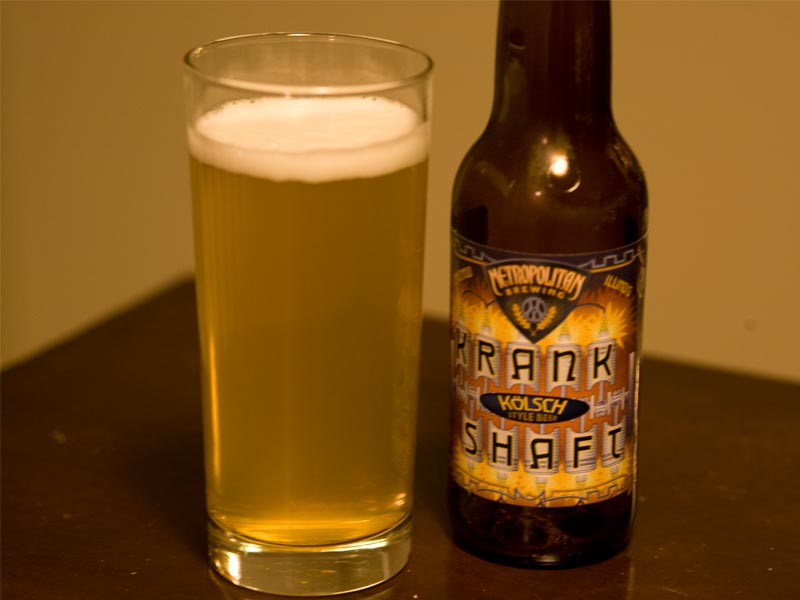 So, it’s cold outside in the western burbs, and I’ve spent a good hour of my day walking in it. I come in from the freeze looking for something intriguing. I’ve got the apartment to myself for the moment. Time to kick back and listen to some tunes – random playlist starting with “Chubb Sub” by Medeski Martin and Wood. And pour a glass. Reaching into the fridge with eyes closed, my fingers find the cold hard bottle of Metropolitan Krankshaft Kölsch. Beautiful. A little taste of Germany this side of the Pond.

So Metropolitan Brewing Company is a native Chicago brew palace, up on north Ravenswood in Chicago. Never been there. In fact, I’ve never even heard of them before tonight. But they make Kölsch, and I freaking love Kölsch. It’s a hybrid beer, light in color and boasting a feisty personality. Smells sweet and fruity. Kölsch beer has its origins in Cologne, Germany. Other Kölsch brews I’ve tried are New Holland’s Full Circle and I think another one by Summit: this Metropolitan is the best I can remember.

The color is great … lightly golden and hazy. But not hefeweizen hazy. And no floaties. This beer is brewed with a little wheat malt on top of the hops, which gives it its character. This is less bitter than pilsner, which I also enjoy. I guess it looks a little like a summer beer, but actually it has a crisp, full taste to it that makes it a great choice at any point in the year. I am extremely eager to try this beer on tap.

I’ll end with a little soliloquy from Metropolitan’s website:

Word is bond. Hat’s off to these guys for an excellently brewed beer.