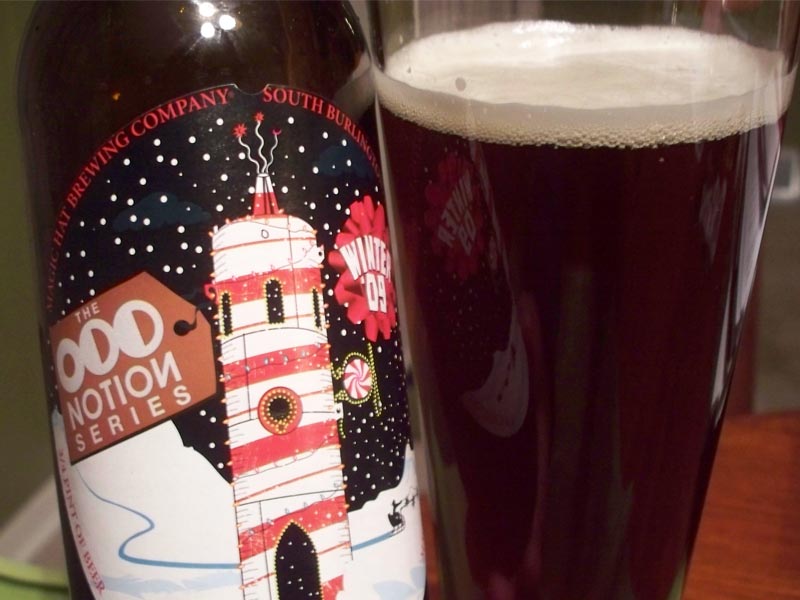 I’m all for being different but if you aren’t careful, you cross into just being weird. That is what happened with this 2009 winter seasonal from Magic Hat in their “Odd Notion” series. Magic Hat says, “Odd Notions give our brewers regular opportunities to set their creative impulses free, and create deliciously different beer drinking experiences that push the boundaries of taste-laden possibility in intriguing new, and heretofore unexplored, directions.” I would say the boundaries have been pushed right past being a good beer to being an awful creation. This beer would have been better unexplored.

This American sour ale pours an amber, brown with a little head that quickly disappears. The smell is very weak and nothing very special stands out. There is a very mild scent of spices and sour apples. The smell prepares you for exactly what the beer is going to taste like. Despite the dark color, the taste of the beer is very watered down. The predominate taste is sour apples. It starts out very sour with slight hints of a woody taste and a little bit of vanilla. The high carbonation softens the awful taste and then it finishes more sour than it started with.

I couldn’t even finish the beer. I had to dump it out because it was so bad. I’m just glad I tried this beer before I brought the Magic Hat Holiday Sampler 12 pack to a New Year’s party. I wouldn’t wish this beer on anyone!