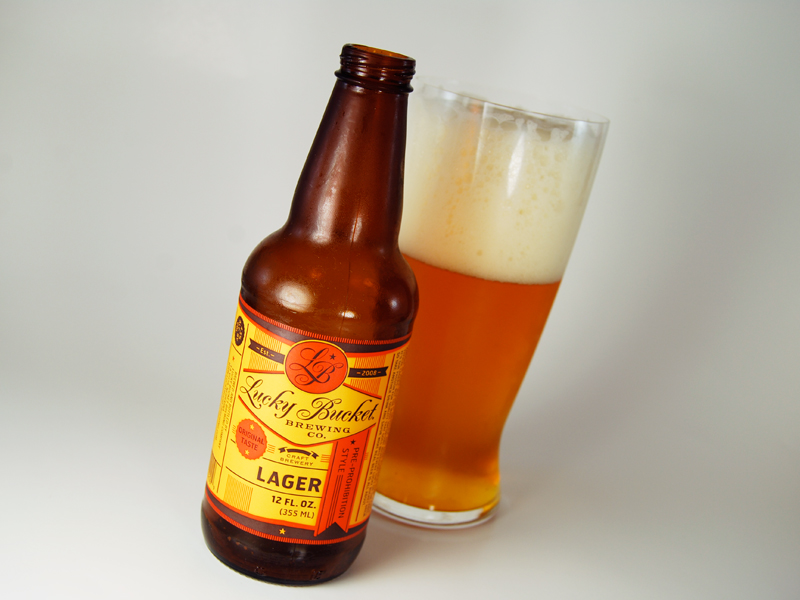 Prohibition is a scary word to us beer lovers. A time where just stopping by a brewpub or your favorite bar wasn’t an option. Well Prohibition didn’t just impact people’s abilities to consume the alcohol present in most beers, it also influenced the styles themselves. Lucky Bucket has created a pre-Prohibition style lager, one brewed bigger, with more complexity, avoiding the more watered-down versions that became popular on this side of the alcohol-free period.

Lager is such a broad term, I’m never sure just what my beer will pour like, smell like or taste like before I pop that lid (or in this case screw off the cap). Lucky Bucket’s take on this brew was a beautiful white head, bubbly and big, resting gracefully atop a bronze-to-gold-to-yellow-orange liquid. It was hazy and completely void of carbonation to the naked eye. The rich scent was big on malts and yeast, blended with fresh cut grass and slight citrus notes. It smells much like a brewery, in fact, plain but good.

The taste was a bit shocking. There was a hugely sour angle to the entirety of my sip, from its initial hit on my tongue to the lasting linger on the back of my throat, this did not seem like the proudly ‘sessionable’ brew that Lucky Bucket was attempting to make. The grains are there too, hidden too-subtly beneath the bookends of sour. As I drink my third and fourth sip I am less surprised and thus more able to appreciate the flavor. While it is nothing like what I was planning to swallow, it isn’t bad. The brewery’s claims of this flagship being their go-to beer, however, seem a bit far-fetched. Knowing the typical beer drinker is seeking a plain Jane, light, carbonated beer, this one would most definitely not fit the bill. Nor would it be a beer I would introduce to get a buddy over to craft beer. Interesting, even somewhat enjoyable, based on the style and the brewer’s thoughts, I can’t say I’ll return to this beer.