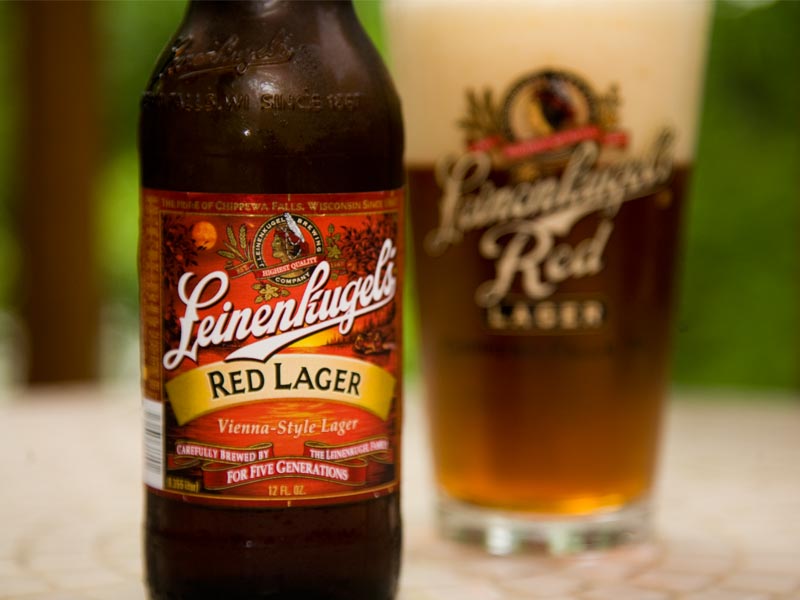 I’ll admit that thus far, the Vienna Lager is in my Top 2 as far as styles go. Well, let me rephrase that. The Eliot Ness Vienna Lager brewed by Great Lakes Brewing Company is in my top two, and in my humble opinion is the best representation of the style I’ve had so far. Enter Jacob Leinenkugel et al, with his/their rendition of this classic, malty-yet-balanced (should be, anyway) style.

Leinie’s Red Lager is a year-round staple from the famous Wisconsin brewer, and it’s been around since 1993. It’s brewed with Three Pale, Carapils, and Caramel malts (where are the European malts!), as well as Cluster and Mt. Hood hops for balance. IBU is 20, so that gives you a sense for how “bitter” it is(n’t).

Poured a clear, red-twinged brown into my Leinie’s Red Lager pint glass (haHA!), with a more than adequate light tan head: I wanted to make sure I got a good sense of the nose so I went for a bigger head than usual. The nose wasn’t brilliant, just average. I picked up the caramel malts, mildly toasty. Nothing big on the nose which I thought was unfortunate.

As for the taste … it was so-so; mild. Leinenkugel’s is not noted for making big beers. I would say that their lineup has one foot in the craft beer circle and the other in the mainstream circle: beers of many styles that have classical backbones but have been toned down a bit for the inexperienced palate. That’s how I feel when I drink a Leinie’s … I feel a little dumbed. The Red Lager here leaves the essential (I think) European malts off of the grain bill (Munich? Vienna?), greatly detracting from the taste. That leaves you with a thin Vienna-style Lager that’s on the fringe of the style, commercialized to the limit.

This beer does not taste bad. It is just weak for the style. At 4.9% ABV, it’s made to be drunk in quantity.