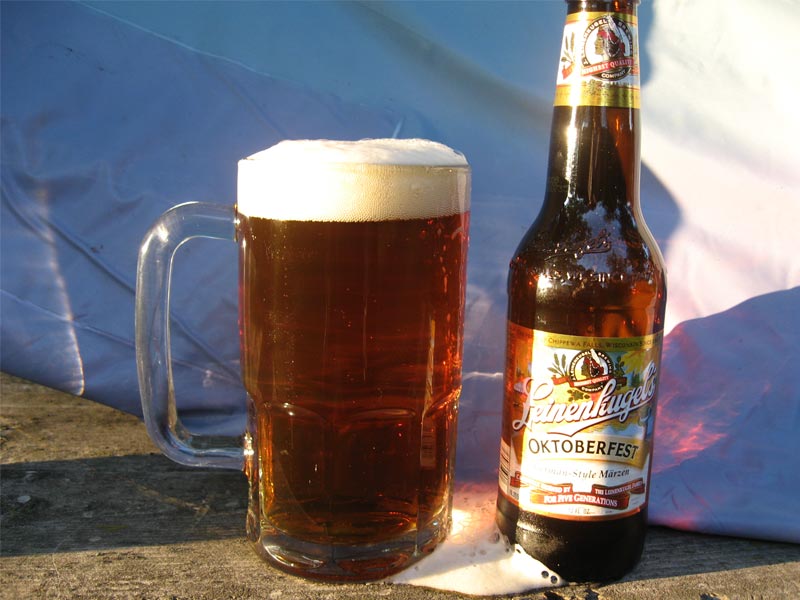 During a late Fall day after work I tried to soak up the remaining amounts of sun before the Winter months brought their gloomy clouds. With a camping chair and warm vest I just sat out in the backyard watching the squirrel frantically hide their foraged findings. Right before the sun west down I remembered I had a couple Leine’s Oktoberfest in the fridge. I quickly poured them into a mug having returned to my chair to watch the sunset.

Like Beck’s Okto, Leinenkugel’s rendition was not the greatest. It was good; don’t get me wrong, but nothing wowed me about. The color was typical for its style and the sun shining through made it pleasing to the eye. A foamy head capped the bronze liquid and brimmed over the top.

The aromas were of well, toasty and caramel malts. I did notice that this brew had a biscuit-type smell which dominated the other flavors. While it might compliment other flavors and aromas at times, I felt the biscuit notes were too much. It detracted from the overall flavor and gave a harsh husk/tannin bitterness in the middle of each sip. The hops used were pungent and did give off an earthy herbal quality common to most Marzens.

As the sun sank, I was grateful to have enjoyed a seasonal beer. However, I was also grateful that there were none left in my fridge that needed to be finished. Uneventful would be a good word to describe this brew. I like Leinenkugel’s, but this is one of their average beers.