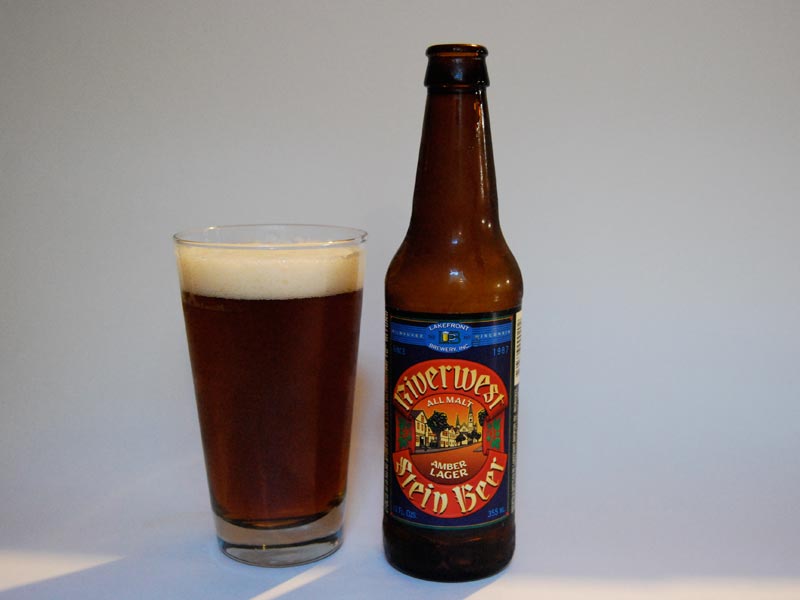 I was told life would never be the same. I had no idea. When that little 6 pound 6 ounce ball of joy entered this world two months ago, I couldn’t have guessed. But now, after weeks of reviewless beer drinking, I know just how much life has changed. The fifteen minutes for writing that I found in such bountiful supply eight weeks ago have vanished before my very eyes. Of course, I have maintained a consistent discipline of beer sampling, but have been utterly unable to jot even the briefest of notes to accompany my sipping. So today, between her last meal and her next dirty diaper, I am desperately trying to squeeze in a brew. Priorities, I guess.

For my reintroduction into the brew review world, I have chosen Lakefront’s Riverwest Stein Beer, a lingering orphan of my last beer-of-the-month shipment. It pours an opaque brownish, tinting to an orange around the edges and is topped with a fairly rich, condensed head, off white in color and both lacey and lasting. It says its an amber lager and seems less amber in color and less lager in texture than either of those would normally lead me to believe. The contradictions continue, as the nose is almost nutty, reminiscent of a brown ale or two I’ve happened across in the past. After inhaling the simple scent, I dare not sip, but instead indulge in a deep draught seeking a refreshing reprieve from the brutal summer’s heat. The malts are overwhelming, rich, buttery and thick, with just a tinge of citrus on the exit. It goes down smooth and is substantial and filling. Rather than refreshing it is heavy, a great choice on a fall evening, perhaps. Lakefront proposes a German fare pairing and if I had a mustard-slathered pretzel in my other hand, I think it might be just perfect.