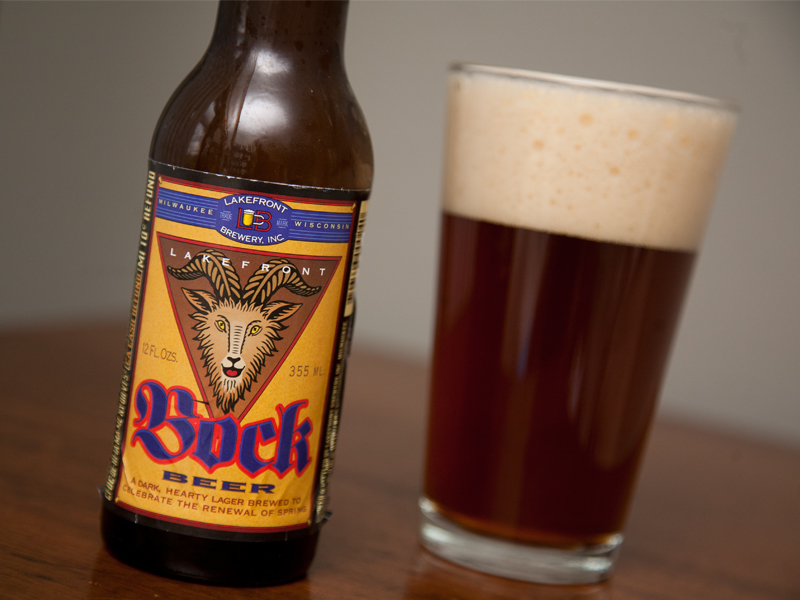 I recently grabbed a couple of singles at my local liquor store and two of them happened to be seasonals by Lakefront Brewery. The other night I cracked one of them, their Bock. When it comes to this style, it’s hard not to spend most of your time talking about German brewing traditions. Bock comes in a few different forms, including Doppelbock, Eisbock, and Maibock. The traditional Bock is through-and-through German, and is a medium-strength, malty, lightly-hopped style.

I’ll be honest and say that I didn’t expect much from Lakefront in this category. Turns out I should have been more kind to the Wisconsin brewery … they really did a nice job on this one. Poured into my pint glass a nice deep brown with a reddish hint, created a really nice head, and boasted some great aromas of toasted, biscuity malt. The smell of the beer is warm and sweet, and … if brewed to style … always reminds me of walking into the house as a child and being greeted by the smell of homemade bread. Lakefront’s Bock did all of these things.

The taste experience was also grand. The beer is well carbonated and delivers tastes evenly and fully. All of the great Munich malts dominate throughout, and are subtly tempered by … you guessed it (or did you?) … Hallertau hops. At 6.7% ABV, Lakefront’s Bock nestles cozily in the middle of the range for the style.

Overall I can’t find a whole lot to say against this beer. It is simply brewed, with total respect to the German tradition. And it’s hard not to respect a brewery that can brew a traditional style and brew it well. Some styles are better left untouched, and I think the Bocks are one of them. Cheers to Lakefront for a great version of this classic German style.