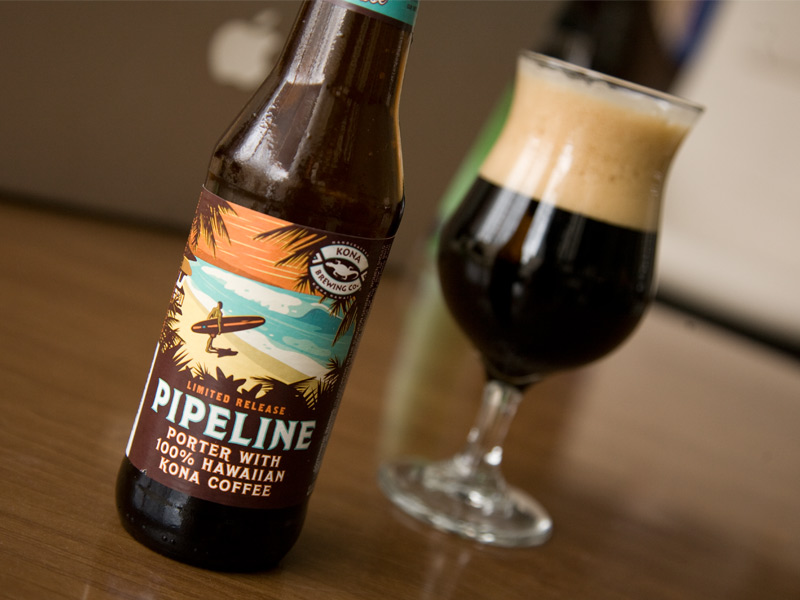 Taylor: Coffee and beer. Believe it or not, the two were not always as commonly spoken of in the same context. Historically, coffee entered the conversation around the time that porters and stouts did, which was mainly 18th century London. But stouts may have surfaced in some form or another as early as the 1600s. Interestingly enough, the coffee flavors in dark beer don’t mean that there is actually coffee in the beer … that coffee taste common to porters and stouts is usually there because of dark roasted malts … like black patent malt for example. It wasn’t until much later in beer’s history that brewers started actually using coffee beans in their recipes.

Which leads me to another question about today’s “coffee” beers. When a beer is labeled as a coffee stout or porter, what does that mean? That roasted coffee beans are used in the grist? That they’re added during a boil? Or that already-brewed liquid coffee is merely mixed in during fermentation or bottling? In the case of Kona’s limited release (actually, it’s a summer seasonal) Pipeline Porter, I am waiting to hear back from the brewer.

I poured mine into a tulip glass and easily developed a nice big tan head. Using the tulip opened up the nose (thanks to that outward bevel) and allowed me to smell … coffee. Now, this porter is not the same as a stout. It is not as big, sitting at a comfy 5.3% ABV. And I can tell the difference even in the nose … Pipeline Porter has some great smells, but the style does not pack the same aromatic punch that an Imperial Stout would. It doesn’t have the dark fruit/molasses notes. Pipeline Porter smells like fresh coffee … not as strong as a real cup of joe, but then again, it isn’t served piping hot.

After a sip, I decide that this is an enjoyable enough porter. Certainly drinkable, with easily identifiable coffee and chocolate flavors (just look at that grain bill!). It is smooth and well carbonated, not bitter but well balanced all the way through. I took my time with the glass to see how it would taste as it acclimated and I wouldn’t say it changes much in either direction as it warms … just gets a little flat which is okay in a beer like this.

When reviewing a porter, why is it so easy to spend all your time comparing it to a stout? It’s as if we somehow believe that porters hold no intrinsic value and are really just wannabe stouts. But this kind of thinking is ludicrous. Porter is a milestone style in the  history of beer, even if its story is co-mingled with that of the stout. In the late 1700s it was the strongest style around. It was the first beer to be consistently aged at breweries. And it made its landing here in America in the late 18th century.

Kona have added great Hawaiian coffee to their Americanized porter recipe, and the result is a drinkable, sessionable coffee porter that pairs great with food. Grade: B

Tom: A Porter with coffee all the way from Hawaii sounded rather comical to me at first. If I would in that climate I’d want a nice Pilsner, Kolsch or Wheat to sip on. However, lifting the glass to my nose, then taking a sip proved me wrong. It was a standard looking porter with a dusk shade of brown. The head was creamy and beige. At first waft it smelled of well…coffee. This was not a heavy coffee aroma or taste, but a light blend that melted into a milk chocolate richness. Smooth and sessionable the malts balanced well with the coffee. The mouthfeel was creamy and I got a grape jammy taste around the middle of the sip. Porters generally have more of a coffee finish/aftertaste (as opposed to Stouts which have a burnt grain astringency) so the addition of coffee helped to bring that to fruition. A nice brew for the Oct-Dec months as the weather changes…or if you’re laying in a hammock on a cool beach. Grade: B

Noel: Because of my aversion to caffeine, I have to get my occasional coffee fix through other avenues. Most recently, it was with this beer. Porters almost always have a burnt, roasty, coffee-like quality to them anyway, but Kona’s Pipeline porter just does a slightly better job of amplifying the dark, smooth, almost nutty quality of good coffee. This was my first of Kona’s beers, and is a solid, though somewhat forgettable offering. Maybe it’s due to the fact that so many porters leave me wanting just a little bit more. Still, it’s a well executed and extremely sessionable ale…though it seems much more enjoyable for a wintery Midwest day than a beach party in Hawaii… Grade: B