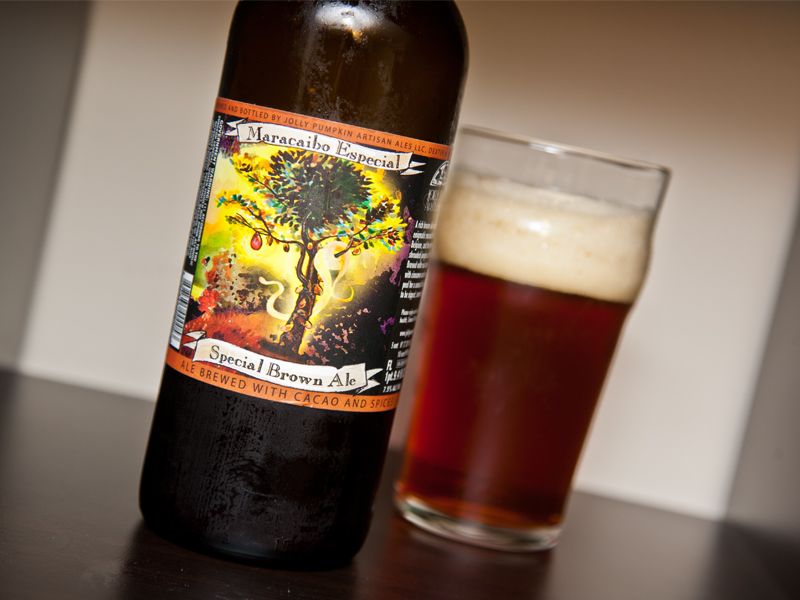 Last night I pulled a bottle out of the cellar … one that I have been looking forward to for some time: Jolly Pumpkin’s Maracaibo Especial (Blend 5, November 2010). This bottle was gifted to me a while back and I was really anticipating it. Maracaibo Especial is a special Brown Ale brewed Belgianly (as are all of Jolly’s brews) with pure cacao, cinnamon, and sweet orange peel. The beer comes in a fine brown bottle whose shape I much enjoy … reminds me of the kind of rum bottle you’d find on a pirate ship.

A few months ago I had the privilege of hanging out at Jolly Pumpkin’s Ann Arbor brewpub: sat at a table in the second floor lounge, which was overcrowded, humid, and loud … just like a middle school locker room. They were tapped out of a lot of the beers on their list, and I ended up sitting there for a couple of hours drinking beers I wasn’t interested in. Joke’s on me I guess. But I was with my cousins, so that made it palatable.

Last night’s sampling of Maracaibo Especial was a far cry from that musty, late night fiasco. In the quiet and comfort of my very own kitchen, I poured this rusty brown elixir into my pint glass and sighed deeply and with satisfaction. I think the best beer experiences are to be had away from the cacophony, in places more refined and subtle than loud and crowded. It’s in a place conducive to meditation, focus, and evaluation that I believe we can best judge a beer. Of course that isn’t to say that beer tastes awesome at parties, tastings, festivals, etc …

Maracaibo Especial is, like I said, a rusty brown with some great carbonation that develops easily when you pour into the middle of the glass and take your time. The nose will definitely come alive and in this case was bursting with this spicy, tangy aroma that seemed pretty atypical to me. Newcastle this ain’t. But it wasn’t “off-tasting” so I pushed ahead.

I was expecting to taste a few things: first the Brettanomyces aka “Brett” (yeast used in many traditional Belgian beers). Many people look at Brett as imparting undesirable and astringent off-flavors, which is legit. But this beer is brewed in the Belgian style, so the presence of Brett gives it a traditional foundation which I believe is important. I was also looking for some cacao bitterness and also that spice from the cinnamon, and figured there’d be a nice malty backbone to it for balance. As I sipped the beer, most of my thoughts were conformed. It’s a bitter beer, sour almost … that’s thanks to the Brett and probably the cacao. The cinnamon is there, but subtly. And the malts are in the background as well.

Calling this a Brown Ale is kind of misleading. When you use Brettanomyces as your yeast, you’ve gotta know that anything else you put in it is going to play second fiddle. There’s just no reckoning with the Brett. I appreciate the creativity with which Jolly Pumpkin approached this seasonal beer (released yearly in November) … but I can’t vouch for its effectiveness. Sometimes mixing American nuance with Belgian tradition just doesn’t fit.

If you’ve developed your palate enough to the point that you can enjoy and evaluate beers brewed with Brettanomyces … you’ll probably like this beer. It has some flavors of fall to it. But if Brett isn’t your thing and you know that it’s hard to get past those sour flavors, you really have no business messing with Maracaibo Especial. I think it’s a pretty polarizing brew, and am very interested to know what others think of it.