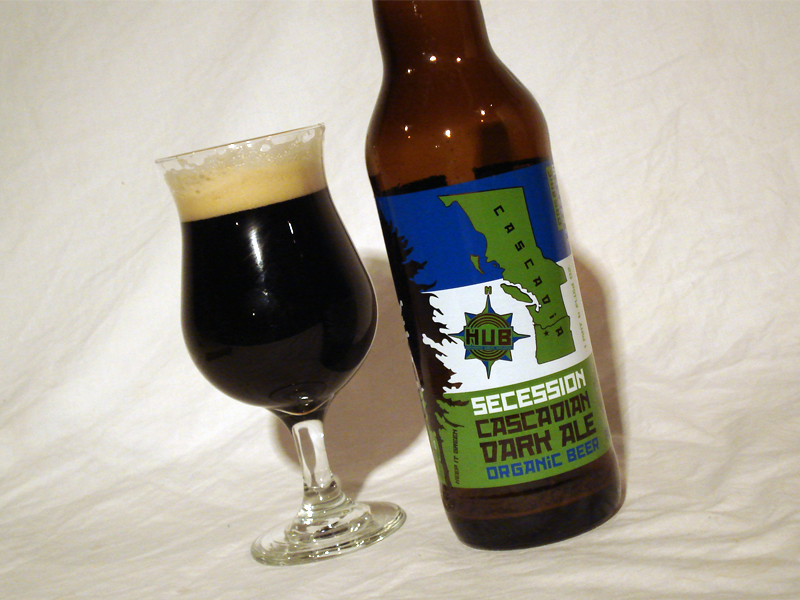 I acquired this bottle in a beer trade from my homebrewer friend Washington.  Thanks Bill.  Not surprising of people in the Pacific NW, Bill enjoys the outdoors and lives up to his recommendation.  After all, one must consider the region in which the beer hails from…the Cascadian mountain range which is displayed on the bottle lest you forget.

After doing some research into Hopworks Urban Brewery (aka HUB), I realized that this is not just your average green brewery, but one that is hardcore about doing their part to protect the earth.  Furthermore, they promote a healthy lifestyle with what appears to be a cycling club.  At the end of my reading I was very impressed with their operation.  So how would I respond to the beer in front of me?

For starters it had the similar appearance as Two Brothers Hop Juice Black.  Dark coffee colors capped by a creamy beige head which not only laced, but was plastered to the walls of my glass.  Quickly moving onto the aroma I noticed a difference.  More spicy, rustic, earthy, and woody than past Black IPA.  While the hops were very much present they came alive more in the flavor than the aroma.  It was sappy, piney, resinous, pungent, all things Northwest forest.  I was instantly brought to a pine forest in the cool of the morning.  Dank, musty, heavy fog rolling through.  The malts seems muted, yet not far removed.

I’m not sure if it is due to the organic aspect of this beer, but it is shockingly balanced…seriously.  Everything comes into harmony with the other parts of the beer.  The roasted malts come through prominently in the finish providing a dry dark fruit (raisin) flavor which is complimented by a piney, spruce hop flavor.

Definitely a quality brew worth trading for and trying if you like the style.