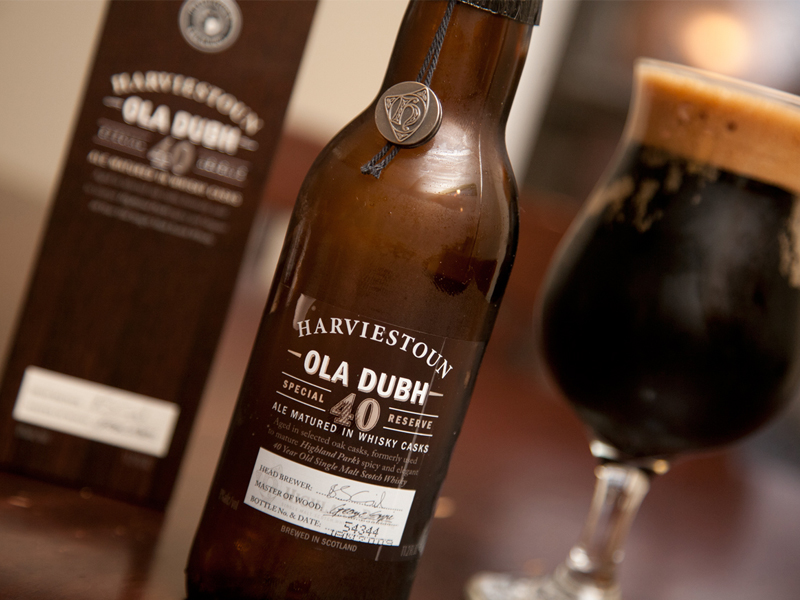 Typically I would be cellaring a beer like Harviestoun’s Ola Dubh (Black Oil) Special Reserve 40. It is an epic brew: based on Harviestoun’s famous Old Engine Oil, Ola Dubh 40 is a collaboration between Harviestoun Brewery and Highland Park Distillery. It is an ale that pays homage to Imperial Porters and Stouts, and it is aged in 40-year Scotch whisky barrels (and yea, since this is a Scottish-made beer, I’m going to spell it “whisky”). According to the brewer, it is the first ale to be aged in malt whisky casks from a named distillery. Initially the Ola Dubh Special Reserve series was available in a 12-year (see Tom’s review), 16-year, and 30-year version. This 40-year version is new and improved.

I decided to drink this Cask-aged Old Ale because I wanted other people to know about it, and I wanted to experience it for myself. Call it professional curiosity…

Ola Dubh Special Reserve 40 came in a really cool brown box á la most special barrel-aged beers. Except this one comes not in a bomber but a 12 oz. bottle. I wish that wasn’t the case, but … Highland Park 40 Year Old Single Malt Scotch Whisky casks are a little scarce these days. At $20/bottle, it’s no secret that this beer is a rarity that will only be around a short while.

I poured my bottle of Ola Dubh 40 into a tulip glass. Just like Old Engine Oil, it came out smooth and viscous, as if I was emptying the oil pan of my car. It was soft, warm, and uniform, and produced a little bit of head that developed right at the end of the pour. I could immediately smell the whisky and oak. It was sweet, dark, smoky, oily … mysterious. It was hard for me to believe the beer is only 8.0% ABV … it just seems so much bigger than that.

After my first sip I was convinced. This is an excellent, excellent beer with a great pedigree. The taste was rich with earthy cocoa notes, but also bitter. There are sweet and salty elements to the taste, which make it unique and hard to compare. Mouthfeel was good, with enough carbonation to bring out all the flavors. I let the glass sit and come up in temperature … and as it warmed, Ola Dubh 40 changed dramatically. The smoky nose and finish slipped away and left most of the sweet. When warm, the finish still had a slight hop twinge that kept it borderline balanced.

And let’s not forget the whisky. All the way through this ale is the wonderful smoky/sweet character of aged single malt Scotch. It mixes with slight oak flavors and gives the beer a regal air. It makes you feel and act like you’re sipping expensive whisky. You take your time, savor each small sip, letting it coat your palate, chewing all the way through it. I am dying to try Highland Park’s 40 Year Old.

All in all, I wish I could have this beer on hand. I might even go get another bottle to cellar for a while. $20 is a lot for a single 12-ounce bottle of beer, but I am in no way regretting my purchase. I’d really love to hear what others thought about this one.

Check out the Highland Park 40 Year Old tasting video to learn a little more about the Scotch this beer gets flavors from.