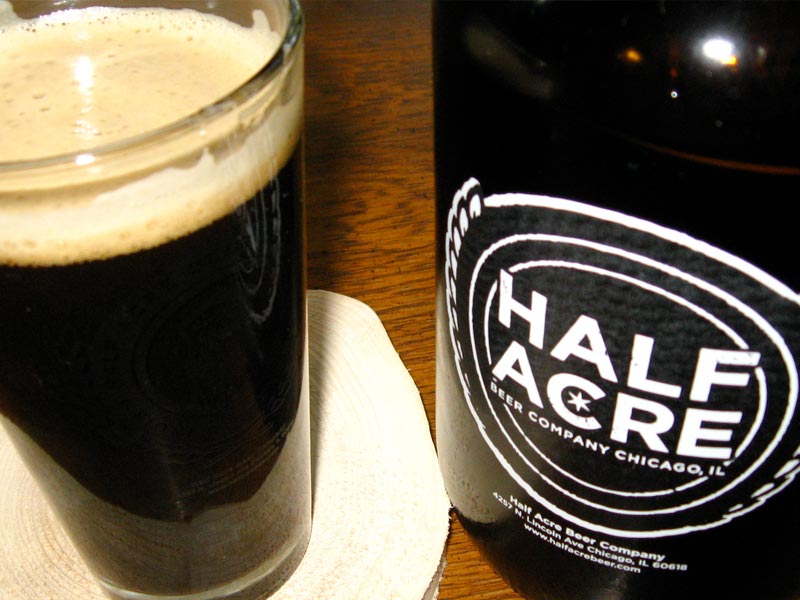 Sticky Fat! What is that? I had the same question when I read Half Acre Beer Company’s blog about a month ago. According to the legend, it is a bear that loves to steal ready-to-pick hops right off the vines. This beer is only available on-tap on the brewery and is an interesting take on a fresh hop harvest ale. Most brews utilizing freshly pick hops are akin to IPAs where as Half Acre throws these flowers in a Brown Ale (they call it an American Dark Ale).

In addition, the weather has turned towards the cool side with Fall approaching causing most beer drinkers to start reaching for Oktoberfests, Brown Ales, and Porters. I found this beer interesting in that it blends two styles typical of the late summer/early fall season (brown ales and wet hop ales).

Sticky Fat boasts a head similar to that of a chocolate shake with a body that is a hazy burnt brown hue. It literally looks like your pouring a something close to melted milk chocolate. The aroma is crazy delicious packing a big citrus hop nose that is uber FRESH (both because it is on tap and the hops we flown in shortly after being picked). I’d say that they provide a light (not pungent), yet juicy quality that makes me think I’m about to bit into a tangerine, pineapple, or even better a mango. The malts lay down a rich chocolate/sweet coffee body that culminates in a fondue experience before you even take a sip.

Flavor side this beer kicks ass! It is smooth, creamy, velvety and rich while maintaining a great hop presence. Here’s what happened. Tipping the glass my nose I thought I was about to sip a Brown ale, but then the front half seemed disappear. Holding it on my palate quickly brought out the wet hops glory as there was a very dominate tropical citrus taste. Shortly after the hops worked their magic the malt qualities started to become apparent in the finish. More so in the aftertaste as there was a definite chocolate sweetness that complimented the light resinous hop remains. The mouthfeel is somewhat moderately heavy and yes, it is sticky.  This could fall into a couple styles, but I’m going with Brown Ale.