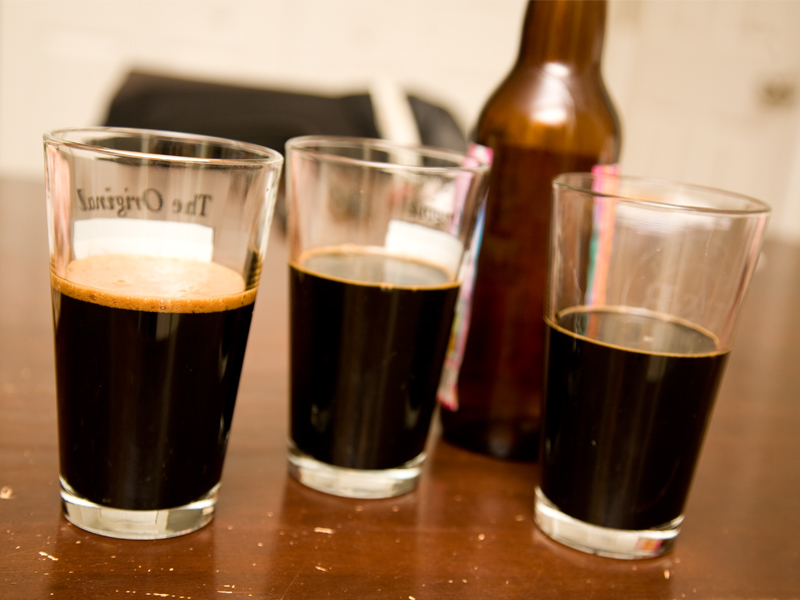 Taylor: Here is a really great stout brewed by some guys I know (Justin and Matt) who go by the name of Windmill Brewing. Named “You’re Killing Me, Smalls” because it’s intended to be a s’mores stout. I tried the unfermented wort a few weeks ago and it was absolutely stunning. It was ridiculously sweet, as you can see from the grain bill. Without further ado … we poured a bomber into 3 pint glasses. There was very little carbonation, and I had trouble achieving a head as you can see from the picture. In the end this stout was force-carbonated. Appearance was that of thick blackness, like dirty, sticky engine oil. Unfortunately without a head, the nose smelled simply like sweet malt and high ABV. Upon sipping the beer, it was incredibly sweet … definitely the sweetest beer I think I have ever tasted. Very chewy mouthfeel, über thick and heavy feeling. Really, this beer is almost like a syrup. As for taste: I noted licorice and prune, and maybe a bit of chocolate. Overall I think the brew could rival something like Dark Lord, but it needs to be tempered some more with more carbonation and definitely more hops. I didn’t think it lived up to its name exactly … it lacks the toasty, biscuity flavors one would associate with s’mores. I am eager to see this brew tweaked … it can easily be a winner. Hard to believe this was a first batch, let alone a homebrew. Grade: B

Tom: The appearance is pitch black, just like engine oil. It’s viscous, syrupy, with no head. Needs carbonation. Has legs. As for the aroma: smells like licorice … it’s super sweet, with an ABV punch. Earthy, rooty kind of like Dogfish Head Bitches Brew, chewy, very heavy. It’s sweeter smelling than Dark Lord, and has a little metallic hint in the nose as well. This stout tastes like it looks: sweet and rich, with a creamy mouthfeel that coats with stickiness. It definitely needs more carbonation to offset the mouthfeel. Tastes of dark fruit as well. There are not enough bittering astringent grains, leaving the stout too sweet with a strong ABV kick. As it is now, the beer is too strong and unbalanced. I imagine it would favor a good 1-year cellaring. Grade: B-

Noel: I made the mistake of assuming this black, viscous stout was going to suffer a bit from a lack of body…something that can be fairly common in homebrews. Boy was I wrong. I actually didn’t even know it was an Imperial stout until the first sip pounded my esophagus and my bro confirmed the ABV at around 10%. And trust me, you can taste every bit of it.

This beer has a ton going for it: thick body, low carbonation, smooth finish, and some serious flavor. Dark fruit and licorice notes are out in full force. Mouthfeel is full and syrupy. And the alcohol cuts through and really makes you think twice about drinking it too quickly. Without a doubt, the strongest, most in-your-face homebrew I’ve ever had. There are no off flavors to speak of, and it has an ever so slight caramel-y tinge at the end (when it’s a bit warmer).

The only disappointment was the absence of anything s’more-like. I couldn’t catch any chocolate, any burnt malts, or any honey-biscuit flavors akin to graham crackers. It definitely was sweet enough for my liking, but that roasty, toasty, chocolatey goodness just wasn’t there. Maybe it was drowned out in the alcohol…I’d be interested to know what specific ingredients were used in order to try and replicate the fireside treat. In any case, a first-rate first-batch. Grade: B+