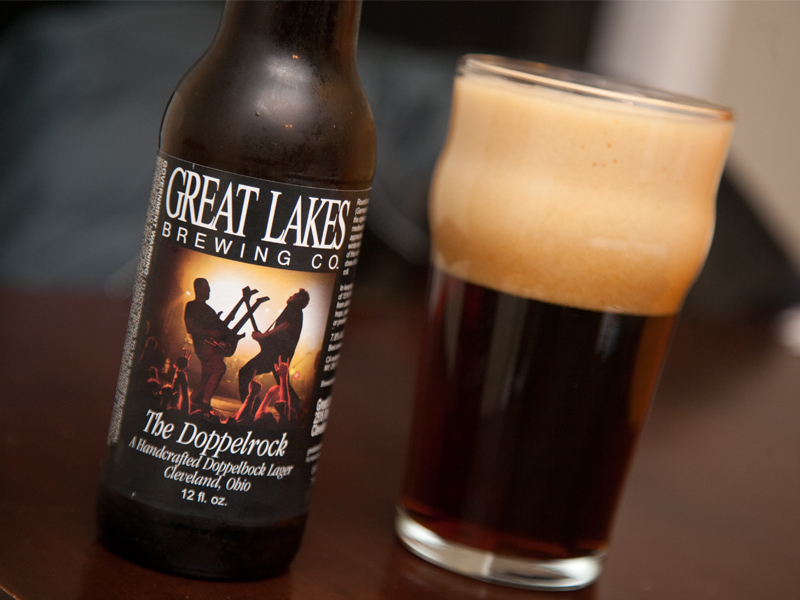 Taylor: Malt. Here is a substance complementary to mankind. It makes beer sweet. It gives yeast something to munch on. It represents an endowment of rich flavors and hues. While almost all beer requires malt of some kind, few styles rely on it as heavily as the Doppelbock (or double bock). Doppelbock is a German-originated style first brewed by medieval monks in the 14th century, later adapted as a lager by 17th century Munich brewers. Fasting from solid foods during Lent (46 days), the monks would brew plenty of “liquid bread” to help their bodies endure the 46-day span. Needless to say, Doppelbock is a classic style both historically and culturally. And it is yummy.

Enter Great Lakes Brewing Company, a Midwest enterprise known globally for its skill in crafting classic styles. What is more, they know how to use German malts and hops better than any other brewery I’ve tasted (so far). Their version of the Doppelbock is called The Doppelrock. Interestingly enough, while Great Lakes brews The Doppelrock with great care for the classic recipe, they depart from popular nomenclature. Most beers in this style have names that use the “-ator” suffix (e.g. Salvator, Tröegenator, Rejewvenator, etc). Not Great Lakes. Nbd. What do they care, as long as their beer is incredible? Available in February and March, The Doppelrock is one of Great Lakes’ best seasonal offerings.

Great Lakes suggests pairing The Doppelrock with hearty beef stew … so I filled my imperial pint glass just as I was putting homemade chili and cornbread casserole out on the table. What a combo that turned out to be! In appearance the beer is a deep, deep reddish brown. From the second the beer left the bottle and splashed into my glass, I was literally roundhouse kicked in the face by Mr. Malt. It was such glorious aggression. I have been nursing a serious love of malty beer, and I knew from the moment I bought The Doppelrock that I was in for a treat.

There is no way around the malt in this beer. Those that do not care for malty flavors should stay far, far away from The Doppelrock. Its malt bill is menacing: Harrington 2-Row Base Malt, Munich, Cara 45, and Chocolate, all heaped into the recipe with the glee of a little child. For balance, Great Lakes uses Hallertau hops (a locally grown of German noble hop). So, while the beer is made with American-grown ingredients, it thoroughly incorporates the classic German tradition. With an ABV just under 8% and only 18 IBUs, The Doppelrock is a malty face-melter to be reckoned with. Beneath the foamy tan head (this beer has great carbonation) lies a beer that delivers toasted bread, biscuit, molasses, chocolate, and coffee flavors. It is delightfully sweet on the palate but surprisingly balanced by the Hallertau and CO2.

This was my first time trying The Doppelrock, and I will most certainly be back. It’s yet another excellent beer from Great Lakes to put on my favorites list. In my opinion, The Doppelrock is a perfection of the style. Grade: A+

Tom: I thoroughly enjoy GLBC beers for their fine craftmanship and range of styles, but I’ve never considered myself a huge Doppelbock fan.  So, there I stood in the store debating on whether or not a snag a bottle (I did in the name of expanding my palate).  What I found diving into this brownish-copper brew was an above average interpretation of the style.  Taking into my account my bias, I approached this beer after consulting the BJCP and recalling other Doppelbocks I’ve had.

The first thing that I noticed was the strong malt notes which had some depth and character.  After all, it is a malt-centric brew.  However, exploring the aroma a little deeper I picked up on a very dry albiet harsh biscuit aroma.  This was compensated by a chocolate character, but it still lacked that smooth quality found in German variations.  This carried over into the taste as well.  While possessing hints of nutmeg, cinammon, chocolate, toasted bread, the biscuit notes seemed to overwhelm.  This lead to a dry mouthfeel and finish.  From what I experience before the malts gave a smooth almost jammy dimension.  Not so much here.  Granted the hops could have contributed to the dryness, but overall I was left wanting more.  There was a clean lager yeast quality and a minor grassy hop presence the more I sipped.  The lasting impressions were boozy (ie harsh), bland, musty, and dry. Grade: B