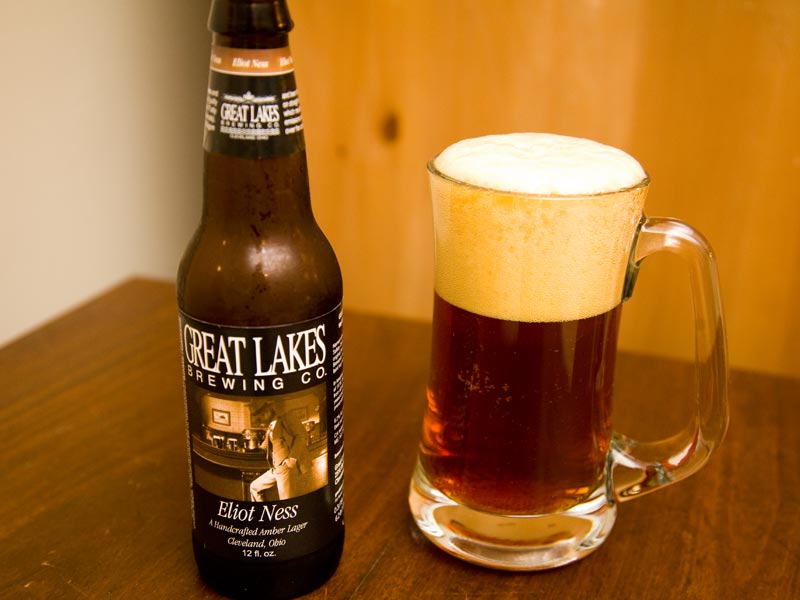 Eliot Ness was born in Chicago, Illinois in 1903, and would grow up to become one of the famed Prohibition-era lawmen. Under the Volstead Act, he was charged with bringing down Al Capone. Anyone who knows film knows Ness was the centerpiece of The Untouchables, a 1987 film starring Kevin Costner, Sean Connery, Robert De Niro, and Andy Garcia. It’s interesting that Ohio brewers Great Lakes Brewing Company, arguably one of the best breweries in the country, would name one of their flagship beers after a man who spent a significant chunk of his career oppressing beer.

According to Great Lakes, the Eliot Ness Amber Lager is named after “one of Cleveland’s most respected safety directors, who frequented the Brewpub’s bar during his tenure from 1935-1941 and, according to popular legend, was responsible for the bullet holes in the bar still evident today. Margaret Conway, the mother of [Great Lakes Brewing Company] owners Patrick and Daniel Conway, worked with Ness as his stenographer.” If this claim is true, then historians and brewers alike can breath a sigh of relief, knowing that the man was just doing his job: Eliot Ness enjoyed a night at the pub just like the next guy.

If Ness was alive today, he would most certainly want to shake hands with Patrick and Daniel Conway, who created the Eliot Ness Amber Lager, an absolute winner among fermented beverages. I was fortunate enough to pick up a single bottle of Ness at Cost Plus World Market, where the craft beer selection is small but superb, and single bottles of nearly everything on the shelf are available for custom six-packs and (in Illinois) cost $1.75 per bottle. After all, custom six-packs are a beer fanatic’s longtime friend.

To enjoy, I chose the classic beer mug, unfrosted (of course) … as recommended by the brewer. Eliot Ness was a brilliant pour: did not froth immediately into suds like so many other beers do, but developed a great 3-finger head as the bottle emptied. Color was a rich reddish amber, crystal clear throughout … a beautiful looking beer, with a hue that would make redheads jealous.

From the smell, I could tell that this was going to be a session beer. The Amber Lager uses Vienna malts, and could therefore be categorized as a Vienna Lager as well. The Eliot Ness smelled perfectly malty (in my humble opinion), characterized by that toasty, biscuity aroma of the Vienna malts. I sensed no hop presence in the nose. Time to partake.

My palate rejoiced upon sipping this beer. An excellent malty flavor, roasty-toasty and biscuity just as indicated by the nose. The richness of the taste is truly hard to put into words. The mouthfeel was great too, with a nice crisp carbonation that delivered all tastes evenly and was noticeable after the swallow … it seemed to linger a for a moment. I have read that this sensation is often described as “chewy.”

Thankfully, the Vienna malt flavors make way for noble hops (not sure which varieties) in the second half of the sip (can I call it that?). I liked the combination here immensely. Since the hops used are more mild and have low acidity, they subtly tempered the toasty malt taste but did not in any way cause me to think of this beer as “hoppy”. The beer finished with a lingering grainy sweetness that I enjoyed.

To top it all off, Great Lakes’ Eliot Ness stands at 6.2% ABV, making it my new favorite session beer. It is extremely drinkable. While I have been on an IPA kick, I have always loved Vienna malts, and this beer brings barley malt and noble hops together in a manner I’ve never tasted before. Through and through, there is nothing negative that can be said about it. One of the best beers I have ever tasted to date.